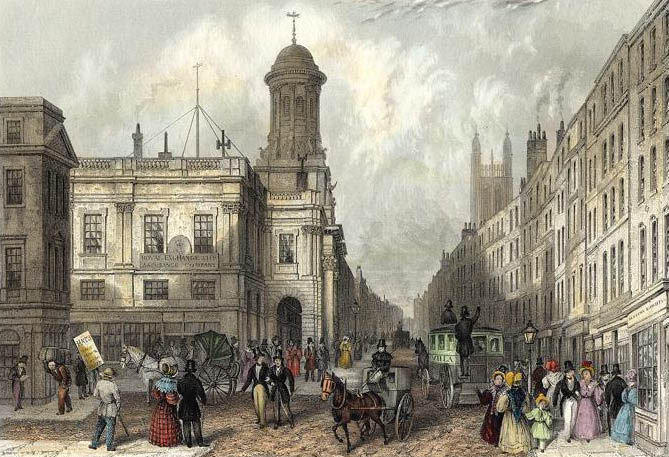 Cornhill is one of the streets that fan out from the Bank intersection ‒ the City’s of London’s financial heart. Running roughly west to east from Bank Junction, it meets the intersection (anciently know as ‘carfax’) between Gracechurch Street, Bishopsgate and Leadenhall Street.  Cornhill was probably laid out in the 11th century, close to where the Roman basilica had stood. Until the 16th century, it extended further east into part of what is now Leadenhall Street (up to St Andrew Undershaft).

As the name suggests, a corn market (meaning grains in general) was established here since “time immemorial”. By the 14th century, it was the only market permitted to remain open past noon. As the open fields and gardens around Cornhill filled up with houses, it became the high street of this district (together with Leadenhall) but maintained a close association with dealing in corn and foodstuffs in general. Eventually, it became a centre of retailing in meat, with foreign butchers being admitted to the market in 1533.

Among important buildings here, were a weigh-house and a prison for ‘nightwalkers’ (the Tun, 1282). This was eventually turned into a drinking water cistern, briefly featuring the first known mechanical pumping system of Thames water (the Standard, 1582). This location was for centuries used as the measuring point for distances to London. The Ward of Cornhill has also long been associated with the guild of linen drapers and by the 18th century they dominated. The most famous establishment on Cornhill is, of course, the Royal Exchange, first built in 1566. While the frontage of the current Royal Exchange faces Bank intersection, the original building faced Cornhill.

In the 18th and 19th century, this area hosted many coffee houses that later coalesced into a more formalised financial market system. By the mid 19th century, as one of the main streets feeding into the stock exchange district, it was considered a street of bankers (Cornhill, like Lombard Street, can be found as a shorthand reference to banking and stockbroking in various accounts of that time. Nonetheless, in the 1840s one could still find such businesses as shirtmakers, furnishings ironmongers, watchmakers, woollen drapers, cutlers, boot makers and publishers.

From the 1850s, a number of elegant insurance bank offices were erected and the street wall retains a great deal of diversity both in terms of era and scale, as well as a couple of Wren churches. Generally speaking, as we move from west to east, the buildings grow less grand though, on the whole, no less graceful.