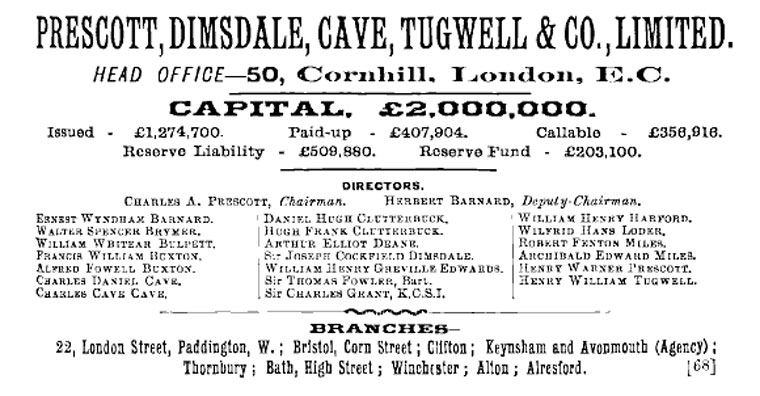 Sandwiched between a rare (for the City) modernist 1930s building and the last 18th century house on Cornhill, the former Prescott Bank building at No. 50 manages to signal elegance without any hint of aloofness or pretensions of grandeur. The composition of tall banking hall followed by gradually more abbreviated upper storeys and bold terminating cornice is a well-balanced example of classical proportions and restrained, refined effect.

The double height ground floor is faced in rusticated Portland stone but the well-proportioned Tuscan columns and pedestals are in grey polished Aberdeen granite.  Above it, the successive storeys are faced in red brick and feature fully encased stone window surrounds. There are stout neo-baroque balconies on the third floor and a forcefully moulded, balustraded cornice on top – featuring a full complement of mouldings, modillions and rosettes.

Among other details, note the spandrel carvings which perhaps refer to the family arms of the bank’s original founders’ family arms.  Some asymmetry is introduced by the pediment-and-oculus set above the western entrance, which could have more fruitfully been simply arcuated. Overall, Prescott Bank prefigures the Edwardian return to less eclectic references.

The private bank was founded in 1766 (in Threadneedle Street) as Prescott, Grote, Culverden & Hollingsworth and, via a number of changes and mergers, became Prescott, Dimsdale, Cave, Tugwell & Co Ltd in 1891, as a joint stock bank. It then took over a number of smaller rivals and was simply renamed Prescott’s Bank in 1903. Further amalgamations by 1918 brought it under the aegis of the National Provincial Bank, itself a precursor of the NatWest group. This location was a bank until 1997, when the Fuller’s pub chain bought it and turned it into a pub and hotel. From its establishment in 1895 until 2017, the City University Club was located here in the upper storeys.