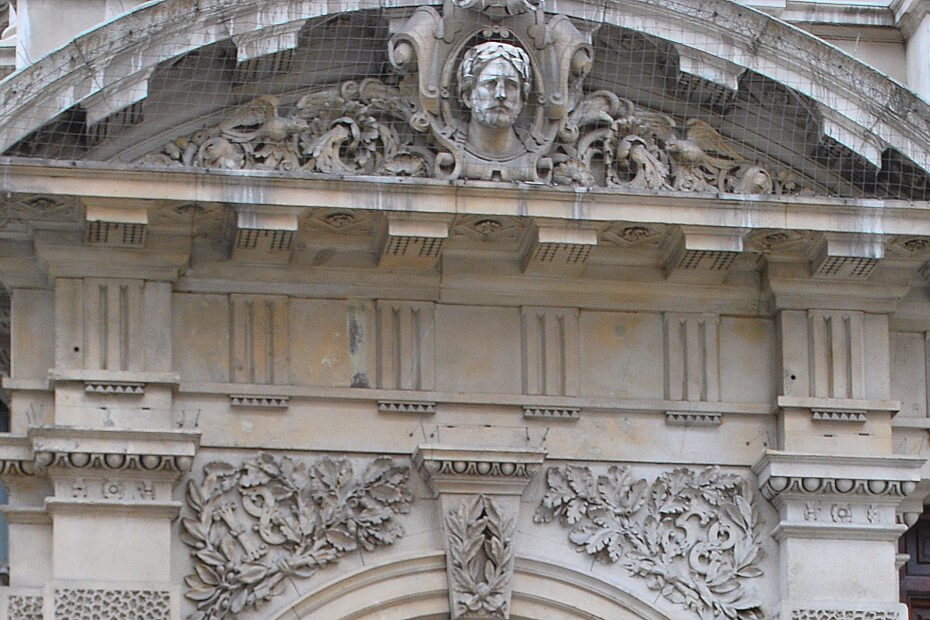 Faced entirely in Portland stone and benefiting from none of the chromatic enhancements of buildings further East on Cornhill, the former National Discount Company headquarters rely on plentiful but considered application of carved detail to produce a powerful decorative and architectural effect. The overall composition of this corner building is extremely simple, with a strongly lithic ground floor and three successive storeys whose ashlar surface is punctuated by very regular rows of windows until a projecting cornice is reached (above it, pedimented dormers).

Every storey, however, features decorative details that are both unique yet also stylistically consistent with the other floors. As mentioned, the ground floor sports banded rustication with a crisply rendered congealed effect. Doric columns rise from full-sized pedestals and support a simplified entablature.  The arched entrances are surmounted by segmental pediments that abut the first floor and whose tympani burst forth in high-relief carving.

The first-floor windows are aediculated with a fully-developed ionic order and balustrades. Scrolled consoles lead to the moulding that underlies the next story. Here the aediculation is more restrained but the following storey has particularly fine arch-and-lintel fenestration. Note too, the wealth of detailed mouldings featured in the terminating cornice.

Given its period of construction, this is a more ornate classical building than many and perhaps, as some historians state, it was meant to suggest solidity in what was, at that time, the relatively new phenomenon of joint stock financial houses.

The National Discount Company Ltd was established in 1856 and was the second joint stock discount house, after the ill-fated Overend Gurney (founded 1800).  The bankruptcy of Overend Gurney sank many private-partner discount houses but not the national Discount Co., which grew, by the 1860s, to be the largest such company.  Though overtaken by the merged Union Discount Company in the late 1880s, it remained the second-largest discount house, buying Cunliffe and Fowler in 1877 and being, in turn, taken over by Gerrard and Reid in 1969 to become Gerrard & National.  It was later absorbed by Old Mutual and then the Barclays group.  The offices at 35 Cornhill were in use by National Discount for over a century; from two years after its inception to 1970, just after the Gerrard take-over.