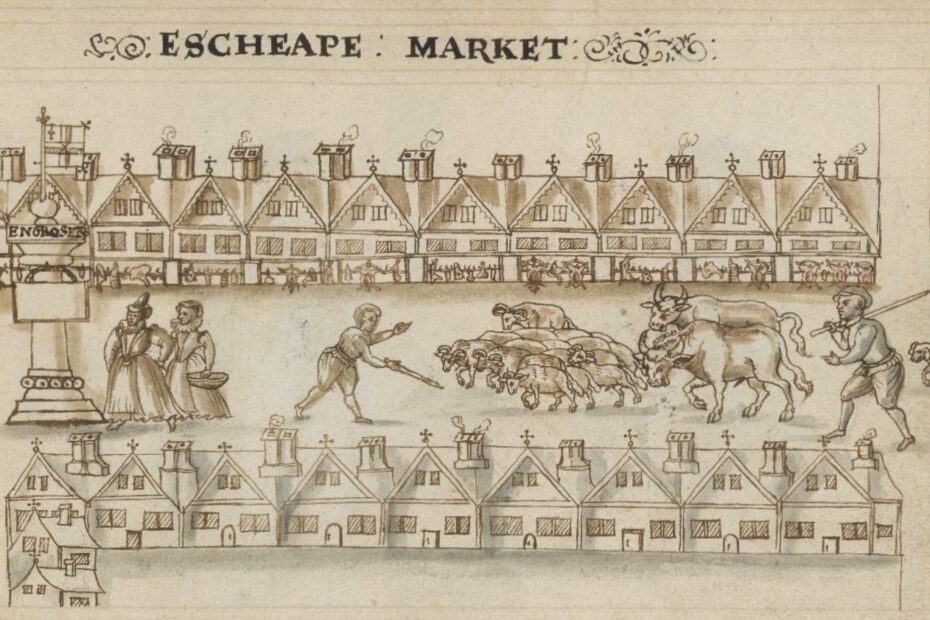 Eastcheap, from ‘east market’ in early English, is a relative toponym, as opposed to Cheapside, which was the westerly market location within the City of London. The Eastcheap placename is first recorded in the 11th century.  Late medieval London chroniclers like Lydgate and Stow have long associated it with cook-shops, butchers’ premises and other retailers of victuals.  One famous establishment on Eastcheap was the Boar’s Head pub, the scene of many historical anecdotes as well as appearing in Shakespeares’ Henry IV. The association with food marketing endured through the 19th century and several of the existing buildings of note along Eastcheap have links to the food business (spice merchants, vinegar makers, tea & coffee importers, etc.).

The originally boundaries of Eastcheap were slightly to the west of the current street, beginning in what is now the eastern end of Cannon Street and ending at Rood lane (as opposed to the current ending at Idol Lane).  The western portion was known as Great Eastcheap while the existing, eastern portion was Little Eastcheap.  The whole street was widened in 1882-4, partly as part of the construction of the Metropolitan Line of the underground railway.  As a result of that 19th C. modification, it now runs seamlessly into Great Tower Street.

Classical buildings of interest (from west to east):