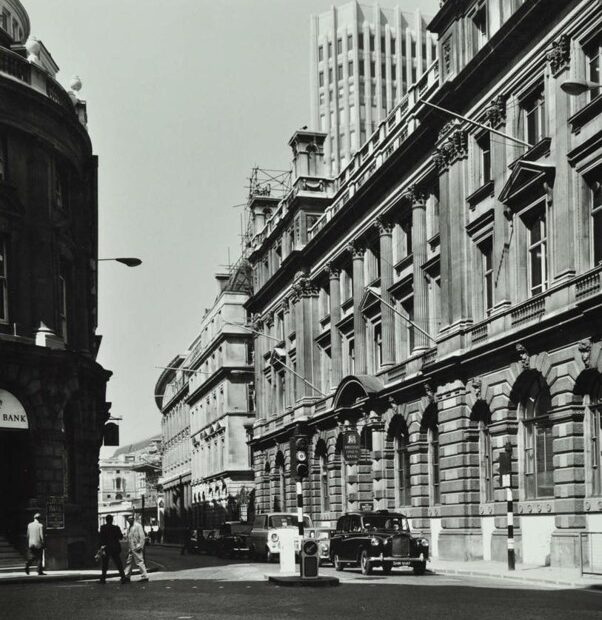 Threadneedle Street is among the most iconic City of London streets and therefore rich with historical associations.  Rather surprisingly, until the early modern era, both Threadneedle Street and what is now called Old Broad Street, which intersects with Threadneedle, were known jointly as Broad Street.  The etymology of ‘Threadneedle’ is uncertain. It could refer to needle makers or tailors, both professions having been prominent in this area.  Most excavations of basements along Threadneedle Street seem to have revealed Roman artefacts and two Roman mosaics removed form here are show at the British Museum.

The Hospital of St Anthony of Vienne was established on the north side of the street in 1243.  This particular spot is a great example of the City’s historical layering.  Soon after the dissolution of monasteries, it was taken over by French Huguenot Protestants and was therefore known as the French Church, rebuilt after the 1666 Great Fire.  In the 1840s, the church was pulled down and the site used to for Moxhay’s Hall of Commerce, a would-be rival to the nearby Royal Exchange (on Cornhill).

This venture, after initial success, failed and the building was converted to a bank.  On the same site, the Westminster Bank would later build a large office.  The two other main churches associated with Threadneedle Street, now both gone, were St Bartholomew and St Bent Fink.

The Merchant Tailors, one of the oldest and most prominent guilds, was long associated with Threadneedle Street, moving their livery hall here in 133, into the former home of one Edmund Crepin.  The original building was modified and rebuilt several times and the current hall still has its main entrance, behind two separate ‘screen’ buildings, onto Threadneedle Street.

From the 19th C. onward, the street became increasingly occupied by the premises of banks and stockbrokers. To the modern ear, however, its greatest association is with the Bank of England, which was founded in 1694 and has been based at the south-west extremity of Threadneedle Street since 1734.

Also of historical interest is South Sea House, at the north-east extremity.  The South Sea Company somehow survived the notorious South Sea Bubble of the early 1700s and its offices were re-built after a fire, in 1826.  The company was only disestablished in 1853. Other historic premises along Threadneedle include the first location of the Baltic Coffee House (which later gave birth to the Baltic Exchange) and the long-gone American Coffee House which was once “next in importance to Lloyd’s for the general information afforded to the public”.

Classical buildings of interest (from the west to east):