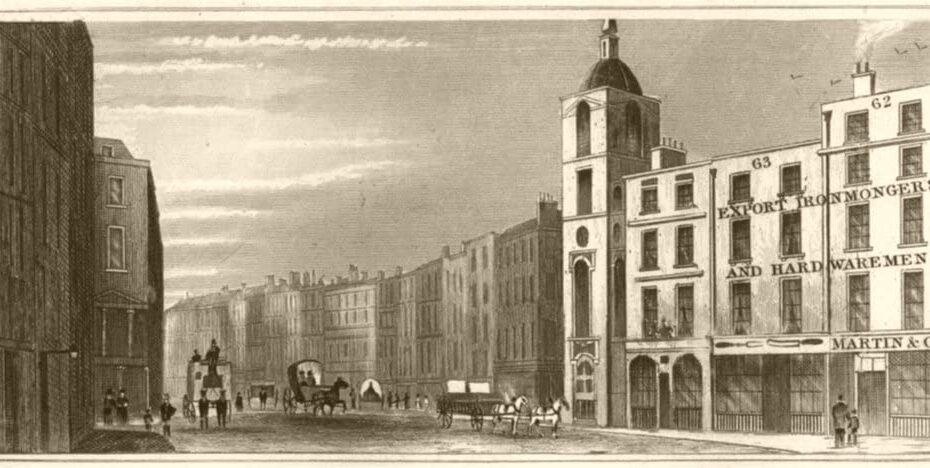 The first written record of this street dates from 1276 but archaeological evidence suggests it existed as early as the 10th C., connecting the area of the former Roman forum to the early London Bridge.  The name, of medieval origin, refers to the market for hay, corn and other herbs, principally imported from Cambridgeshire – (‘grace’ as a corruption of ‘grass’).  This association is similar to that of the nearby Fenchurch Street (from ‘fenum’, Latin for ‘hay’).

Gracechurch street runs from the intersection of Bishospgate, Cornhill and Leadenhall (known as the ‘Carfax’) and it essentially bisects what used to be the Roman forum. Its north-south orientation takes a sweeping turn towards the bottom, away from Fish Street Hill and towards the later, 19th C. alignment of London Bridge.

The the main (or at least most spectacular) western entrance to Leadenhall Market is along Gracechurch Street.  Although it was a street of major standing in the City from early times, there are perhaps fewer historical associations here than on other, similar thoroughfares.  In fiction, it is associated with scenes from Austen’s Pride and Prejudice as well as Dickens’ Great Expectations.  In that sense, it can perhaps be thought of as a stand-in for a well-known but generic address in the old, City.