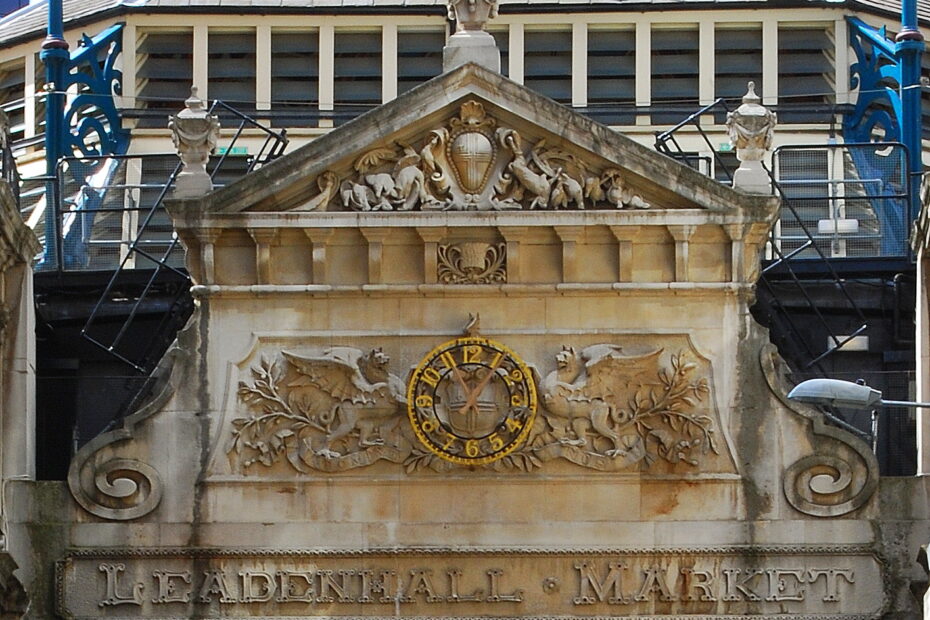 The current Leadenhall Market is not so much a single building as a miniature neighbourhood; one with a particularly long history and a unique presence in the heart of the City.  Nonetheless, the unified aesthetic, architectural and urban character established by its 1881 rebuild means it is best considered as a single entity.  We will begin with its history and then discuss its present arrangement.

Just as the Guildhall stands over what used to be the amphitheatre in Roman times, the location of Leadenhall is directly above portions of the Roman basilica (civic building and courts) and forum (marketplace).  The earliest mention refers to a mansion owned by Sir Hugh Neville, consisting of a stone building roofed (unusually for a private building) with lead sheeting.  It is thought that from early on a market was held within its grounds and by 1321 it was known as a meeting place for poulterers.  Cheesemongers as early as 1377 issued an ordinance that foreign cheese and butter merchants should ply their trade at the Leadenhall.

Between 1408 and 1411, Lord Mayor Richard ‘Dick’ Whittington acquired the property for the City and established it more formally as a meat, game, poultry and fish market. Lord mayor Simon Eyre in 1445 engaged John Croxton (master mason for the Guildhall building) to add a granary and chapel to the Leadenhall complex. Eyre left 3,000 marks for its support.

In 1446 the tronage (official weighing of wool for purposes of taxation ) was set to take place at Leadenhall.  This was at the time one of the largest sources of government income.   By 1463, Lead, nails and wool fabric (worsted) were also supposed to be weighed there.  In 1488, Leadenhall acquired the exclusive rights over the sale of leather in London.  Another exclusive right came in 1622, when all cutlery sold in the City was to be purchased there.

The Great Fire of 1666 damaged Leadenhall but much of it survived, due to its sturdy construction.  Partial rebuilding work created more covered structures and the market’s subdivision into Beef Market, Green Yard and the Herb Market.   The amount of meat sold there amazed foreign visitors (“When Don Pedro de Ronquillo, the Spanish ambassador, visited Leadenhall, he told Charles II. with admiration that he believed there was more meat sold in that market than in all the kingdom of Spain in a whole year.”) By the early 18th century, it was also used to produce and store sets used in summer pageants.

It was partly rebuilt in 1730 and the leather market was restored in 1814, at which time some older buildings, including the chapel, were removed.  A famous character in Leadenhall was ‘Old Tom’, a goose which managed to escape and became a sort of pet, being fed in local pubs and surviving to the age of 37, up to 1835.

In the late Victorian era, the Corporation decided on a more radical rebuild and put in charge the City’s architect, Horace Jones, who had already designed Smithfield Market and Billingsgate.  Well into the second half of the 20th century, it remained mostly a market for alimentary provisions. However, around the turn of the 21st century it has transitioned to more generic catering establishments and retail shops.

The key elements of visual unity are the classically-inspired, claret-and-cream decorative theme that runs along all the market buildings, the cast iron supports and the glazed roofing.   The four main entrances are all surmounted by pedimented gables with Baroque accents. The Gracechurch Street entrance is also flanked by two Dutch-Baroque bays or antae.