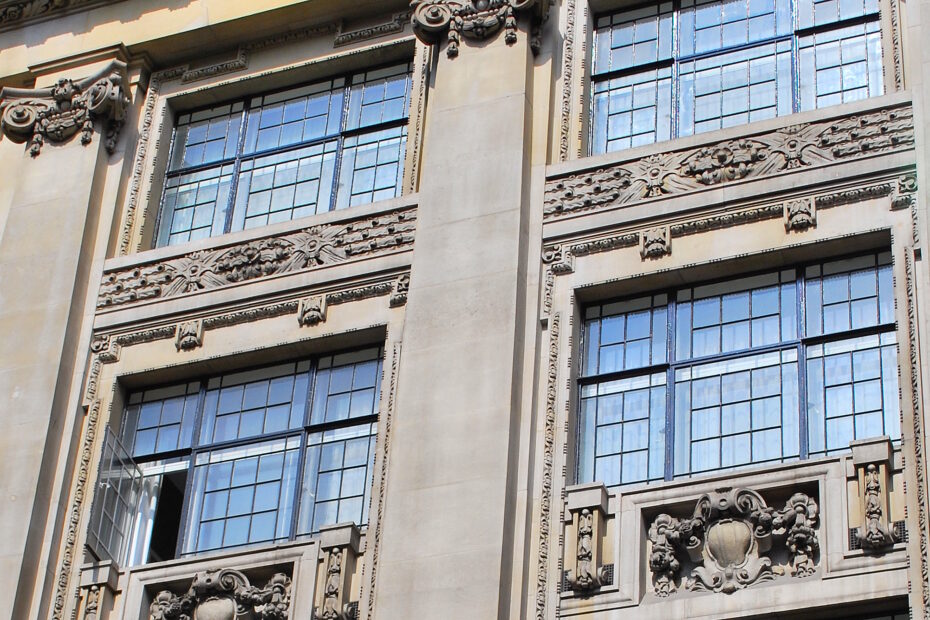 The Hongkong and Shanghai Banking Corporation (HSBC) opened its first London office in 1865, within months of being founded, but used leased space until the early 20th C.  By 1910, it was felt that the offices it rented at 31 Lombard Street were far too cramped and the board decided to acquire its own building, resulting in the present structure.  The cost at the time was estimated at £ 425,000, partly to be recouped by renting some of the upper storeys.  The London headquarters of HSBC remained at this location until 1976.

Sources sometimes refer to the stylistic effect of the Gracechurch Street façade as ‘French’, perhaps in reference to its Beaux Arts details.  We do not dispute the influence of the Ecole des Beaux Arts in promoting a return to late-Renaissance and Baroque forms and arrangement in prestigious buildings just, before and around the turn of the 20th C. That said, by the 1910s this sort of style was clearly internationally employed across Europe, the Americas and anywhere that capital concentration permitted the construction of such buildings.

What seems more noteworthy here, from an architectural standpoint, is that although the ornamental details and secondary compositional elements are unapologetically Classical, the arrangement—so rich in fenestration and relatively devoid of secondary surface treatment—represents a relatively modern, almost structuralist approach to façade composition.  It is closer to early post-war attempts at a more stylised, simplified Classical language (such as the Commercial Union or Scottish Widows offices in the 1920s)  than the fully Neo-Baroque, palatial examples among its late-Edwardian contemporaries (like Royal Insurance or Gresham College).  HSBC’s chairman, in his speech to the 1912 general meeting said that the architect had been instructed that the style should be “simple but dignified.”

Of course, historicist detail still abounds.  Note the alternating plain and reticulated rustication, plus outsized, florally festooned scrolled keystones, of the ground storey, for instance.  Also, there are boldly carved window aprons and parapets in the intermediate storeys as well as a giant Ionic order of pilasters and the terminating cornice.  The window frames, however, while conceding to some ornamental moulding at the ground level, are relatively utilitarian metal casings.  Similarly, the interior contains its share of allegorical sculpture (including work by Aumonier) and banking hall columniation but without the multiple layers of detail seen elsewhere, during this period.

HSBC then, as now, had a reputation as a ‘value-conscious’ house.  It is difficult to resist the conclusion that this parsimonious attitude is manifest in this building, albeit only relatively to the resplendent standards of Edwardian Britain.

The Hongkong and Shanghai Banking Corporation was founded by Thomas Sutherland, a Scotsman with no previous banking experience, between 1864 and 1865.  Having survived a banking crisis in 1866 (11 other foreign banks went under, in Hong Kong), its business grew steadily.  At this time there were many British-capitalised, foreign trade-facilitating banks with largely foreign business in operation.  By 1875 it has opened branches in Europe and North America and especially in several Asian locations. Besides trade and industrial financing, HSCBC also ran debt issues for government treasuries.  It also entered retail banking.  Despite challenging conditions due to two world wars and the Great Depression in the first half f the 20th C., HSBC endured.  By 1965, one hundred years after being founded, HSBC was present in 170 locations worldwide. In the latter part of the 20th C., HSBC’s growth was partly organic but also based on significant take-overs in the Middle East, USA and Britain (where, in in 1992, it bought the Midland Bank, at that time one of the biggest deals in banking history).  HSBC remains a leading presence in international banking. As of 2020, HSBC was the sixth largest bank globally both by assets and capitalisation.  The name of the bank and holding group retain the single-word (older) version of ‘Hongkong’, despite the 1926 change in official government spelling to ‘Hong Kong’.