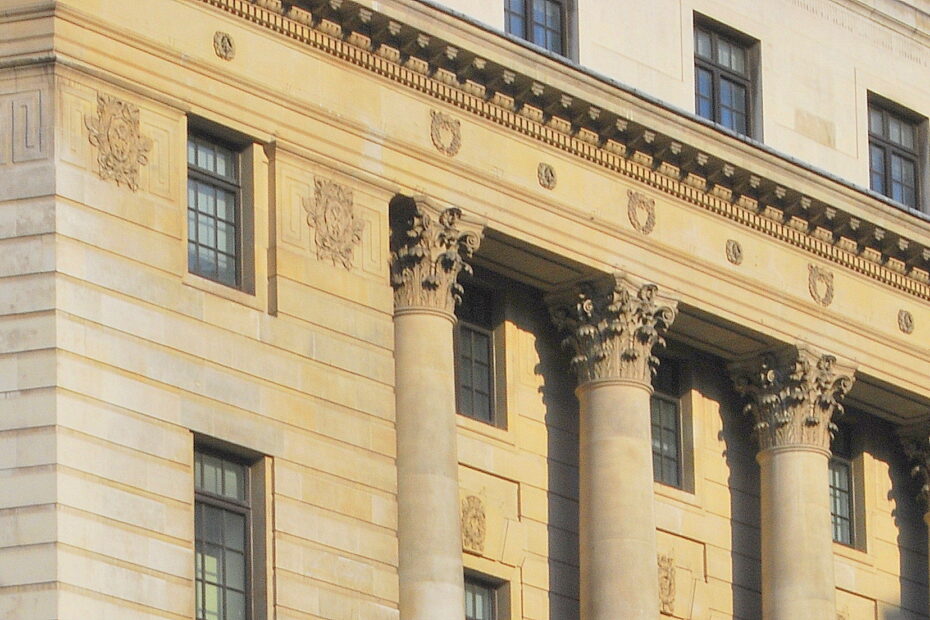 The National Provincial Bank, over its long life, consolidated over 100 smaller bank businesses and eventually went on to form National Westminster Bank (1968).  Their fine Neoclassical head offices of 1864, on Bishopsgate marked a new chapter, at the time, in terms of demonstratively grand offices in the City.  They remained the official address of National Provincial until they were supplanted by the NatWest Tower (now Tower 42), next door, in 1980.  So where does the fine building at 1 Prince’s Street come in?

It begins with the Union Bank of London, which was established in 1839 but moved to Princes Street as early as 1844.  In 1887, having grown substantially via organic expansion and numerous take-overs, The UBL commissioned a new head office building in Princes Street.  That edifice faced Princes Street squarely, rather than having its axis of symmetry bisecting the corner like the current building, and occupied a slightly smaller plot than the present one. However, it already stood at the acute corner between Princes Street and Mansion House Street, in full view of the Bank of England, Mansion House and Royal Exchange.

The Buildings News noted the quality of detail and, especially, the finding of Roman remains during the excavation of the foundations. These had to be dug to the then unusual depth of 15 feet as they straddled the remains of the Walbrook river, making the ground unstable.  In 1918, Union Bank of London, which was one of the larger branch banks in the country, was absorbed by the National Provincial Bank.  While the official headquarters remained on Bishopsgate, the merged entity eventually decided to erect a new, large suite of offices on the existing prime location of the UBL, to a design by Sir Edwin Cooper.  Unusually, for a City building, it is still occupied by offices of the descendant institution: NatWest (even the somewhat ill-fated takeover by Royal Bank of Scotland didn’t cause it to budge).

The proximity of this building, in location, timing and scale to Lutyens’s Midland Bank has inevitably led to comparison between the two, typically to the detriment of the National Provincial Bank.  In my opinion, this owes in part to Lutyens’ considerably greater current prominence and, perhaps, to the fact that the interiors of Midland Bank have been much better maintained and refurbished while the National Provincial Bank was mostly rebuilt behind its facades in the second half of the 1990s.  Part of the banking hall and two panelled rooms were, however, retained.  That said, it is true that Cooper’s Port of London Authority and even his frontispiece for Lloyds of London show greater verve.

The plan of the 1929 building is a truncated wedge which, as mentioned before, develops around a MW-SE axis that bisects the corner on Bank Junction. The slightly concave canting of the apex, its position and the balance of its upward elevation make it a focal point even though neither of the entrances are located there.

In basic terms, this is a 5-storey building with two attics (the second set sharply back).  The vertical sequence consists of a channelled, astylar Doric base of ground floor and blind mezzanine, punctuated by tall arched openings and niches with statuary.  This is followed by the four storeys of the central, columnated element and then the attics.  The horizontal articulation is arguably even more interesting.  The pronounced comer aspect is both distinguished by and linked to the longer side elevations by the repetition of the colossal order of Corinthian columns in the round.  At the corner, they are flanked by substantial antae and create verticality between the base and the prominent sculptural group that breaks through the first attic storey.  Along the side aspects, the same order is deployed more conventionally in the form of hexastyle colonnades.

The application of decorative elements is also worth noting.  The sharpness of the Doric frieze of the lower entablature, bas-relief mouldings accenting the larger expanses of ashlar, the elegance of the upper, main entablature all complement the monumentality of the allegorical sculpture atop the corner façade.  The latter is the work of Gillick, showing Britannia seater between “Lower and Higher Mathematics”, Mercury and “Truth”.