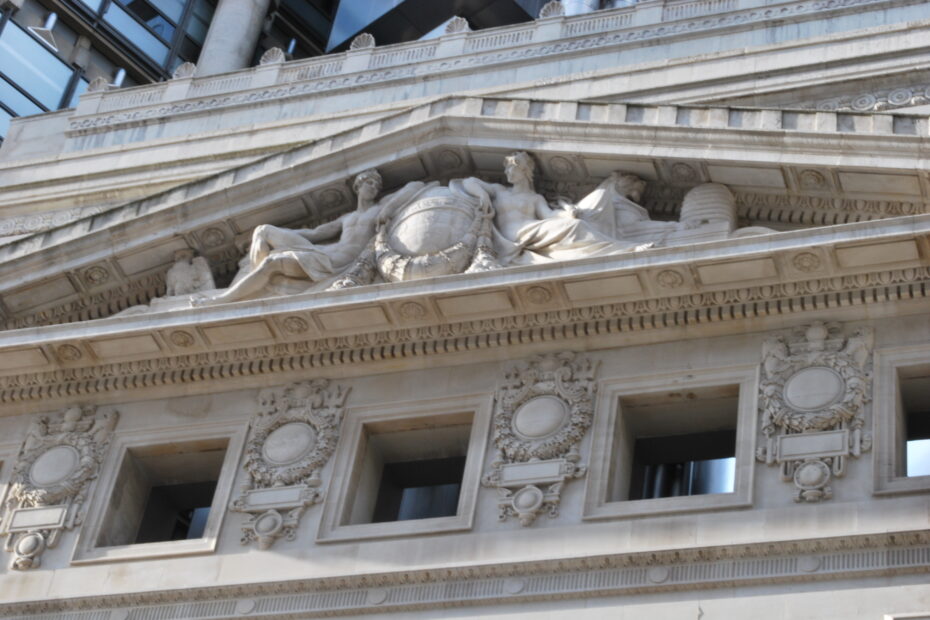 The site here is largely occupied by Richard Rogers’ 1986 complex of office blocks in High Tech style, surely one of the most iconic buildings of the late 20th century.  What interests us is the western entrance bay of the 1920s Lloyds building, which the current design retained in screen form, on the urging of conservation groups and the Corporation of the City of London. We also note that this facade incorporates a war memorial.

Lloyd’s is the world-famous insurance and reinsurance market that began in a coffee house in Tower Street in the 1680s.  In 1691, it was moved to Lombard Street to be closer to the General Post Office; which at the time was a prime source of shipping information. After more moves, it settled into the Royal Exchange in 1774, where it remained until moving to purpose-built premises, here in Leadenhall Street, in the 1920s.  That large building occupied much of the block between Leadenhall Street, Lime Street and Leadenhall Place.

Despite its considerable size, the main Underwriting Room was overcrowded by the 1950s, resulting in and addition (by T. Heysham, 1957) being built across Lime Street. In turn, this proved insufficient and in the late 1970s it was decided to rebuild again, with only the facade of the entrance bay of Cooper’s design being retained.

Turning to this, we can certainly be thankful for its survival, given the delicacy and excellence of the carvings (C. Doman) and its majestic triumphal arch form. Indeed, it can be said that the best bit (of the exterior) was saved.

The festooned cartouches just below the bed of the pediment are particularly worthy as are the fine sculpture and mouldings of the tympanum, the grand coffered alcove, and the rich carvings that adorn the door frame, spandrels and frieze. The composition, though less immediately obvious than the rich ornament, is very balanced. Note, for instance, how the attic openings below the pediment produce an interesting play of light and shadow.

1 thought on “Lloyds of London”