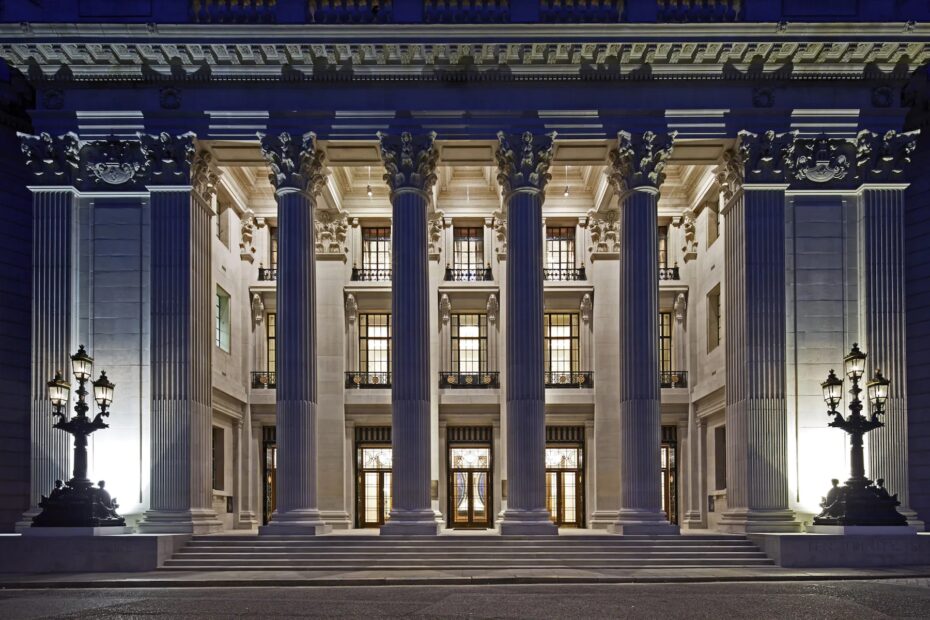 Its position near the top of a rise (Tower Hill) and the open space of Trinity Square make the former headquarters of the Port of London Authority one of the more prominent buildings in the City.  A massive, Portland stone edifice occupying an entire, purpose-made block and rising over six storeys below the mansard roof would be monumental in many places, but not necessarily in the City of London, which boasts many examples of such Edwardian grandeur.  By placing the main entrance and frontispiece on a canted corner, ennobling it with a colossal order and, above all, topping it with a massive, stepped tower and equally imposing sculptural work, the Port Authority turned it into an exemplary expression of imperial optimism.

Springing from a broad, five-step crepidoma, a colossal, systyle Corinthian order of four columns and pilasters in antis supports an entablature and parapet. Above that, recessed from the street frontage, a further two-storey attic leads to a complex, purely ornamental superstructure consisting of a frontal arch plus double-layered pilaster loggias at the sides, all in Corinthian style.  Each loggia and the central niche of the arch are enriched by nautically themed, oversized sculptures (Neptune, in the central arch).

Though clearly subsidiary to the frontal, entrance composition, the lateral aspects are suitably grand.  They are anchored at each apex by massive antae that reference the main colonnade with a set of two Corinthian columns. The ashlar is sharply channelled throughout and the cornice runs around the entire building.  This is a tour de force of relief of mass through details in what is a physicality imposing building that could overwhelm, rather than impress, if it were clumsily handled.

The Port of London Authority was established in 1909 to take over the management of extensive enclosed dock facilities hereto operated by various private concerns. It was felt at the time that fragmented ownership and operation discouraged infrastructural investment and efficient allocation of resources.  The PLA’s mandate extended from Teddington, upstream, down to Margate and Gunfleet Lighthouse downstream.  It also inherited conservancy of that section of the river from the Corporation of the City of London. This building was designed as the PLA’s new offices just before WW I, on a site previously occupied by the Navy Board (17th C.) and Eat India Company warehouses (18th C.).  The Great War, as in many cases of late-Edwardian buildings of this scale, caused substantial delay and it was only completed in 1922, being officially opened by PM Lloyd George.  In 1946, it hosted the first meeting of the general Assembly of the United nations. The PLA moved out in 1970 and the building was turned into private-sector offices until the turn of the 21st C.  Between 2002 and 2012 it changed hands between several developers until it was sympathetically re-purposed as a Four Seasons hotel, opening in 2017. The conversion maintained the external aspect of the original building and many internal features, adding undistinguished extra internal volume (not visible from street level) but also re-creating a (smaller) ground-floor rotunda to good effect.