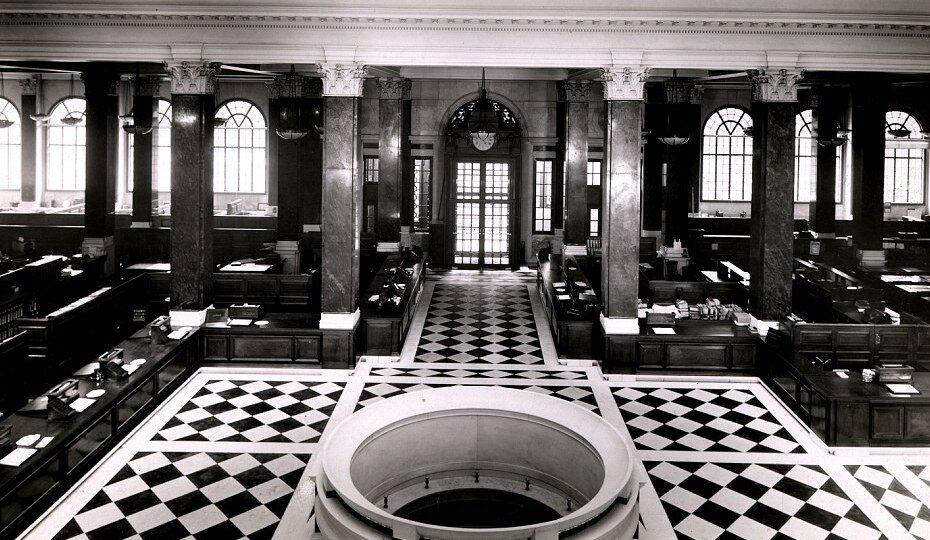 former headquarters of the Midland Bank

Considered one of Lutyens’ best formal corporate designs, the headquarters of Midland Bank, like its neighbour, the National provincial Bank, were clearly intended as an expression of commercial confidence. These new headquarters combined much larger, modern floor plates and steel-framed bulk with historically-based forms and contextual cladding. Both buildings were considered remarkable in their time and examples of a ‘new architecture’.  Few bank headquarters of this period attracted a full-length treatment as Midland Bank headquarters did (A Site in Poultry: The historical background to the Midland Bank Building).

The strong points of this undeniably impressive structure are the legibility and boldly stated subdivision of the lower storeys and the restrained yet assertive articulation of volume at the corners and upper-storey setback.  Ornament is also applied sparingly but artfully, including prominent sculptures at the corners of the Poultry aspect.

The projecting pedimented aedicule at the centre of the facade has a wonderful geometric plasticity and is graced with a rich swag relief.  The urns that cap its lateral piers also add to the terminal elements  however the overall effect of the central element is diminished by its appearing rather detached from the solid base, which gives it a sense of aloofness and stolid formality.

This effect stems from the treatment of the intermediate storeys (3rd through 5th) which, despite added detailing, seem somewhat wan compared to the lively and unimpeachable lower stories. Some have remarked positively about the presence, here, of a strong implicit order but perhaps more explicit (even if subtle) columnation would have provided a greater sense of punctuation. Altogether, while undeniably successful, the Midland Bank headquarters lack the rhythmic effect of Lutyens’ Britannic House or the daring verticality of his Midland Bank offices at 100 King Street, Manchester.

The Birmingham and Midland Bank was founded in 1836 by Bank of England alumnus C. Geach at a time when Birmingham was emerging as a major global manufacturing centre. After absorbing other Midlands-based banks, in 1889 it acquired the Central Bank of London and in 1898 the City Bank, gaining full access to the premier global money centre.  By the early 20th century, it was one of the largest and most internationally-oriented British banks, being correspondent to 650 foreign banks in 1919.  It was a major innovator in the retail and commercial banking sector. Its long-standing association with HSBC eventually culminated in the latter taking Midland Bank over in 1992.

Lutyens, a very prominent architect by the 1920s, was reportedly a friend of Midland Bank chairman Mackenna and had already done work for the bank (like the Midland Bank building on Piccadilly).  The design is from 1924 but, due to economic conditions, construction took place from 1935 (some sources suggest 1930) to 1939. The interiors were and after conversion remain particularly fine.

This building was vacated when HSBC moved its headquarters to Canary Wharf in 2003. For several years it stood empty until, in 2012, the founder of the innovative Soho House hospitality empire launched an effort to convert it into a hotel and dining complex.  This transformation is in my opinion an exemplar of re-use, adaptation and conservation; it hast have been masterfully orchestrated.  The result, named “The Ned”, after Lutyen’s nickname,  is a successful, extremely attractive space that preserves a fantastic building and opens it to the public at a time when vast banking halls have regrettably ceased to serve their original programmatic purposes.