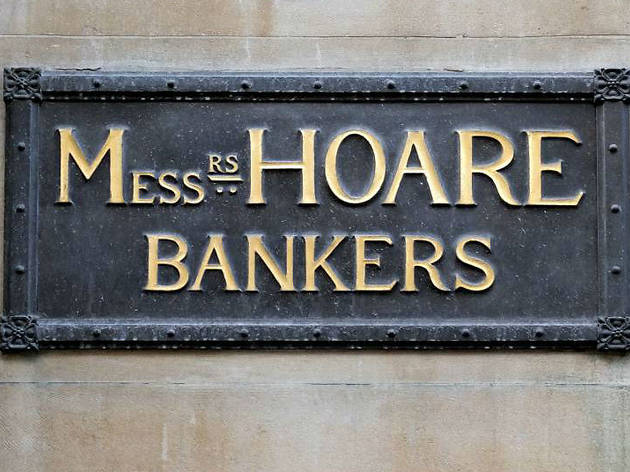 Of the trio of private bank headquarters with a long history of presence on Fleet Street, the only one to remain in its original ownership is Hoare & Co., one of the few extant truly private banks in the world and the only one in Britain.  Founded in 1672 by Sir Richard Hoare “at the sign of the golden bottle”, like similar institutions it began as a goldsmith’s and later became a bank.  They have been at this location on Fleet street since 1690.

The current building, finished in 1830, is one of the earliest purpose-built bank premises with aspirations to elegance and presence, at a time when most such companies were still housed in plain brick townhouses.  Later Victorian bank buildings would soon eclipse it in terms of applied ornament, historical references and complex massing.  In this respect, the simple lines and very restrained relief of mass anticipates a much later trend for stripped classicism.  The warm-hued Bath Stone facing certainly adds gentility to what could otherwise be a rather austere building, as do well-appointed interiors.

The building presents as an astylar, understated Palladian composition with many subtle points, such as the shallow projection of the antae, otherwise marked out by pedimented windows and iron balconies added in the 1930s.  The other second-storey windows feature much plainer, corbelled casings.  While sparse in applied ornament, the building features visual reminders of the golden bottle sign and two-headed eagle symbolic of the family and bank.

Hoare & Co contains an archive and museum dedicated to the history of the bank, a very well-appointed garden courtyard and many mementos including old top hats and Napoleonic-era muskets which once provided a rather more ‘robust’ security measure than is common in banks today.  The building also retains some residential accommodation and was once the official residence of the family, as well as bank offices.