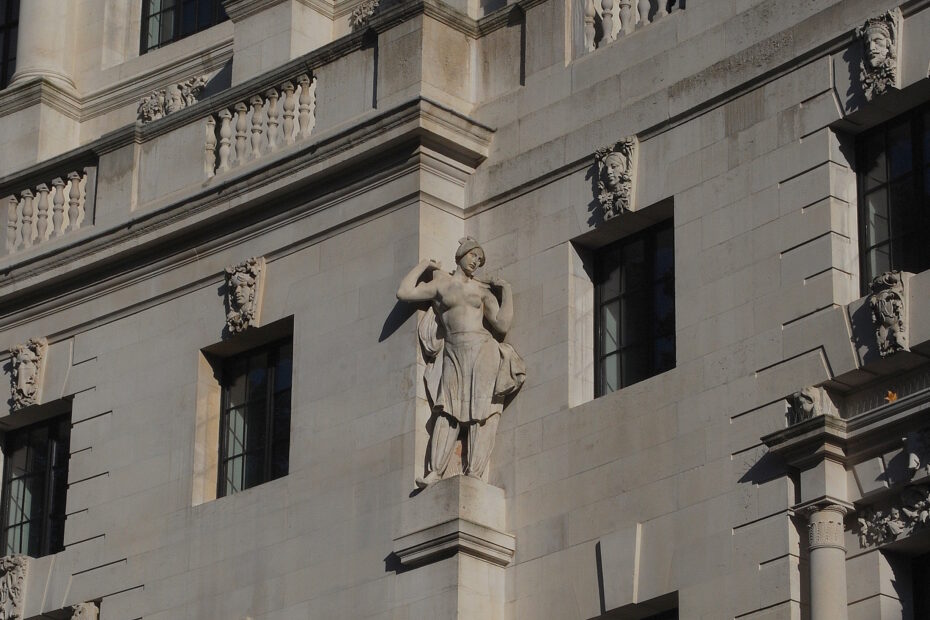 Erected at the NW corner of the Circus, Britannic House occupies the site of 14 smaller pre-existing buildings. Because part of it overhangs Moorgate underground station, the foundations work was particularly intricate and part of the pavement surrounding it, bearing the stresses of a multi-storey stone building over it, are cantilevered.   Built to a height of over 38 metres, it was originally proposed to a greater height than that allowed by the 1894 London Building Act, thus requiring special consent. This was granted by the London County Council in 1922.

The commissioning client was British Petroleum (back then, Anglo-Persian Oil Company), which housed its headquarters there from 1925 to 1967 and again from 1991 to 2003.  The Anglo-Persian Oil Company, was founded in 1908 to pioneer oil extraction in Iran. The Iranian holdings were eventually nationalised by the government there, not before the company became involved in the 1953 coup d’état.  .  When not occupied by BP, the building has been known as Lutyens House.  The Britannic House moniker was temporarily transferred to an important late 1960s modernist complex of plinth-and-slab type in nearby Ropemaker Street. This was itself redeveloped at the turn of the millennium.

The overall effect of the bright stone cladding and, at the back in the side prospects, of the understated articulation is one of lithic mass and solidity. The articulation of the exterior is innovative, despite the application of the classical canon, a characteristic of Lutyens’ mature work.

Vertical development here follows a standard practice of stripped classicism by investing the bottom and top storeys with greater movement while leaving the intermediate portion with reduced ornament and fenestration. The intermediate, two storey, astylar intermediate segment is neither base not upper elevation. Both here, where the ashlar is mostly plain except for channelling around alternate windows, as well as at the base, rusticated throughout, the surface treatment is dignified and monumental, though relieved by statuary in the form of figurehead keystones, full statues at each set-back and the elaborate, recessed aedicules on the second full storey. The statues, by Derwent Wood, represent a mixed lot of Britannia, an Indian Water Carrier, a Persian Scarf Dancer and a Woman with Baby.

Above such a base, essentially creating a raised piano nobile, a giant Corinthian order at the fourth, fifth  and sixth storeys, with a broken, projecting entablature and carved festoons, The corner is enlivened by stepped quoins at that level, too. Behind a balustrade and podium balcony, a series of pedestals are divided by deep sconces with superimposed allegorical reliefs. By associating the intercolumniation with subjacent elements like the tall arched windows and perimeter of the three main bays, Lutyens creates an effect of varied rhythm.  This mix of careful application and sculptural precision would be enough to make the building remarkable but the full effect, of course, is only visible from the Finsbury Circus aspect where the concave footprint accentuates the bravura of proportions through bold movement. Further sculptural enrichment and a subtle projection of the central bay are featured along Finsbury Circus but the measured, undemonstrative application of ornamental devices means that Britannic House avoids a fully baroque effect, nonetheless.  A portion of the grand interiors, like the Brescia marble lobby and stairs, were retained upon redevelopment in the 1990s.