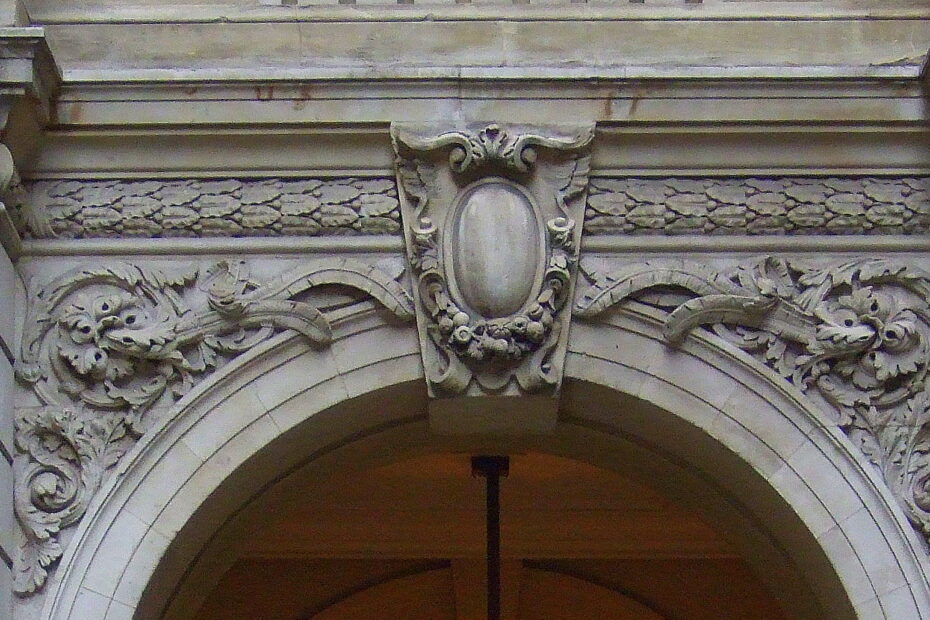 Squeezed between the Eagle Insurance and British Linen Bank buildings, at the entrance to Adam’s Court, stands an arcaded building with a narrow but well-executed facade. From a purely architectural standpoint, the ground floor consists of an arch, bracketed by projecting, channelled ashlar piers.  The architrave above this storey and the arch’s spandrels are richly carved. Above it, the second storey looks like Bath stone and here the composition really excels, consisting of coupled, engaged Ionic columns between which opens a Serlian window with a subsidiary Tuscan order and allegorical sculpture in the window spandrels.  The two animals depicted there appear to be a horse and a camel/dromedary, perhaps symbolic of the Eastern trade in which the commissioning client was involved.

Neither “Buildings of England” nor the listing entry from Historic England provide any information besides the fact it is “late 19th C.”  At first sight, it would appear to be part of either of its larger, neighbouring buildings but it is, in fact, a separate construction.  All we’ve been able to determine is that the Oriental Bank Corporation had offices here from around 1845 (possibly in a preceding building) and that the current edifice is discernible in an 1887 print in the Illustrated London News.  Given the history of the Oriental Bank, it seems likely that construction took place at some point between the 1860s and 1870s but we have no precise dating evidence.  Equally, we have found no record regarding the architect. Another puzzle was posed by the two beautifully detailed (and listed) wrought-iron railings at each end of Adam’s Court which appear in the aforementioned print but now bear the initials of the National Provincial Bank.  Adam’s Court leads to the rear of the National Provincial Bank building by Gibson (1865) and, according to RBS archives, N. 40 Threadneedle Street was added to the National provincial Bank’s estate in the early 1920s, well after the Oriental Bank had closed. The NPB lettering on the gates therefore looks like a case of re-labelling.  Note that between the 1890s and 1920s this building was used by Lazard Brothers and its subsidiary: the London, Paris & American Bank.

The Oriental Bank Corporation was established in 1842 as the Bank of Western India, in Bombay.  Its purpose was to compete with the increasingly unpopular East India Company for mercantile financing business.  In 1845 its official head office was moved to London, at Threadneedle Street, and the bank was renamed the Oriental Bank Corporation.  It undertook further acquisitions and received a Royal Charter in 1851. In the 1860s and 1870s, it became prominent in the Far East business world, with branches in Bombay, Calcutta, Madras, Singapore, Hong Kong, Shanghai, Yokohama, Mauritius, Sydney and Ceylon- among others.  The gradual waning of the bills business (due to the rise of telegraphic transfers), a case of fraud at the Mauritius branch and- above all- an ill-judged speculation in silver led to the bank failing in 1884.   Re-created under a limited liability charter as the New Oriental Banking Company Ltd., it finally closed down in 1892.