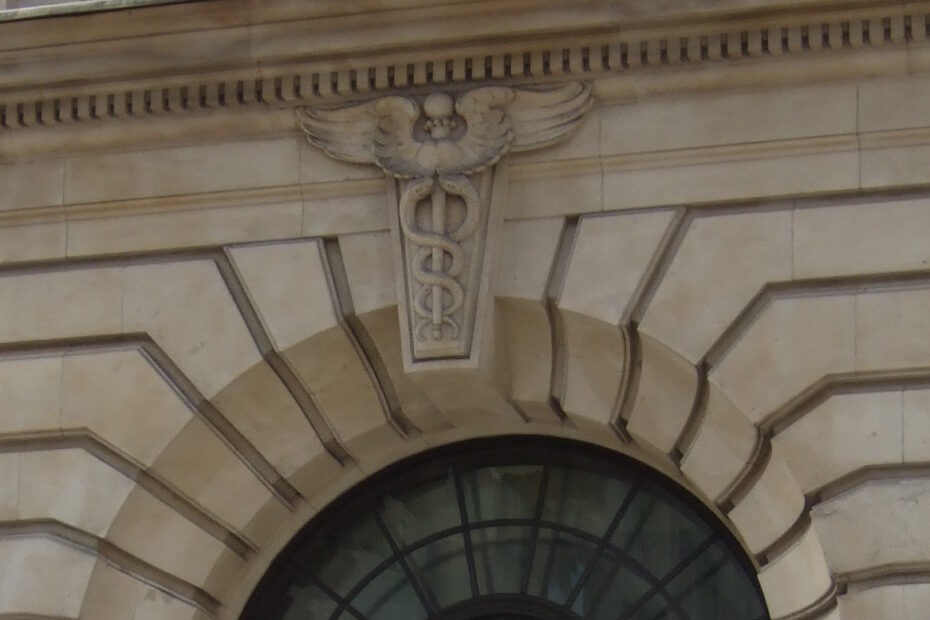 The site of this building long hosted Christ’s Hospital, founded by King Edward VI in 1552, later adding a school of long-established City tradition (moved to Essex at the turn of the 19th century). As the complex of structures dedicated to the Central Post Office expanded, this edifice marks a westward move away from St. Martin’s Le Grand. It was started in 1907 and completed three years later. While the facing is of the London staple of Portland stone, the structure utilises the Hennebique system, an early form of reinforced concrete construction.

Used initially as a sorting office and for other functional purposes, by 1966 it housed the National Postal Museum, which, however, by 1998 displaced from London and sold the building. It now forms part of an interlinked complex of buildings which house offices of Bank of America Merrill Lynch.

Designed by Sir Henry Tanner, the same architect as its larger, less restrained neighbour, it exudes Edwardian confidence and grandeur while maintaining a balanced sense of proportion. Pevsner allows that it “eschews full baroque artillery”.

We can certainly be freer in praising this finely metered building, which marries a certain seriousness with a wealth of well-executed detail. The ground floor is rusticated in the elegant segmented style and subdivided evenly by three shallowly projecting bays in correspondence of the entrances and large, metal-famed segmental windows surmounted by ornamental keystones and dignified cornices.

The three successive floors are almost factory-like in the regularity and amount of fenestration but eschew tedium thanks to the mullion-like device of pilasters and, in the attic storey, ornate Ionic columns and other sculptural accents. The use, on the first floor, of scrolled brackets that do not support any superstructure is the only item of mannerist whimsy. The roof line is beautifully defined by a full entablature with a markedly cantilevered cornice and surmounted by a classical Palladian balustrade.