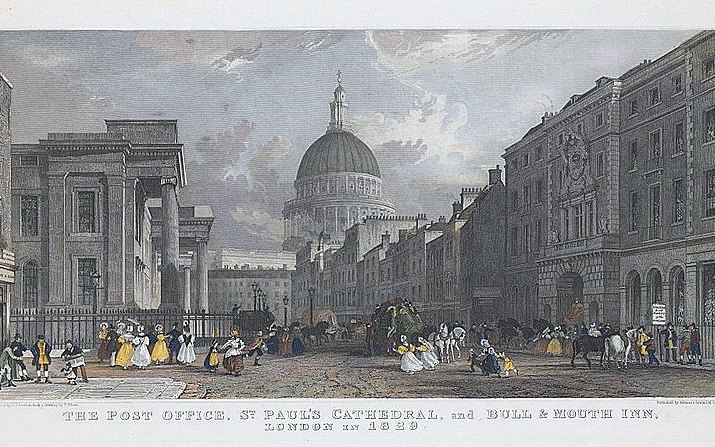 Aldersgate Ward takes its name from one of the four earliest gates in the City walls, probably going back to Roman times. Among the many parishes it contained, St. Martin Le Grand was the principal one until the great fire and it was the centre of one of the City’s main ‘liberties’. This particular one was granted a right of sanctuary from secular authority. By the 1500s it had become such a notorious haven for criminals that the right of sanctuary was rescinded.

Christ’s Hospital was also based in this area for many years. From the early 19th century, however, it became closely associated with the Central Post Office, when the latter moved there from Lombard Street for more capacious digs. After making do with makeshift accommodations, the first purpose-built postal building here was Sir Robert Smirke’s well-proportioned Greek revival edifice of 1825-29, which eventually was demolished in 1910-11. A number of progressively larger Post Office buildings were added, of which two remain and are covered under the Aldersgate location category.