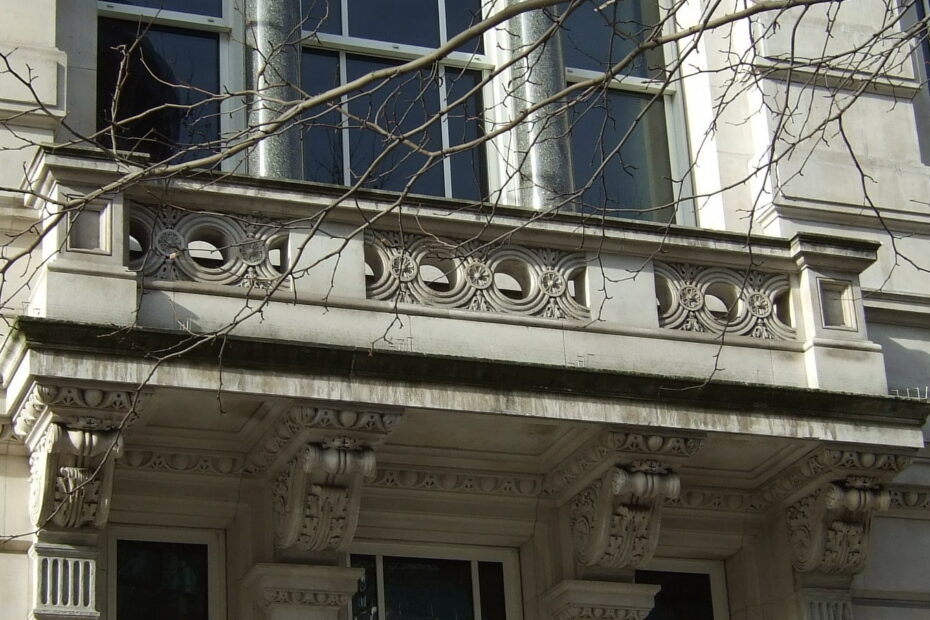 The building in question is the third major Post Office structure erected along or near St. Martin’s Le Grand.  Now housing corporate offices, it rises on the former site of the long-standing Bull & Mouth Inn (a distortion of Boulogne Mouth – harbour) and originally housed the Telegraph Offices, Postal Bank and other headquarters functions. The Post Office sold the building in 1984 and it was subsequently gutted and rebuilt. It is considered the largest ‘retained’ facade in Europe. Note that the mansard roof was added after the rebuilding, to house building technical plant.

The sheer footprint size and 8-storey height confer on it an imposing presence that is only partly relieved by the measured detailing and articulation of projecting bays. Pevsner describes it as “heavy Italianate cliffs of Portland stone”.  As rustication extends over the two bottom floors, the second storey appears as both a piano nobile and part of the plinth, somewhat unusually. Nonetheless it is attractively accented by a well-proportioned cornice above it and, at the bottom, a band of balconies and balustrades in a guilloche pattern. In the middling floors, the pilasters span two storeys and sport a simplified Doric order, followed by a Corinthian style in the mezzanine storey. At every level, the projecting bays are enlivened by relief carvings, particularly in and around the central bay’s arched recess, which features smaller Corinthian columns, swags and allegorical statuary above the arch. The detailing extends successfully to the large but proportionate oeil de boeuf windows that grace the otherwise rather plain mansard roof-line.