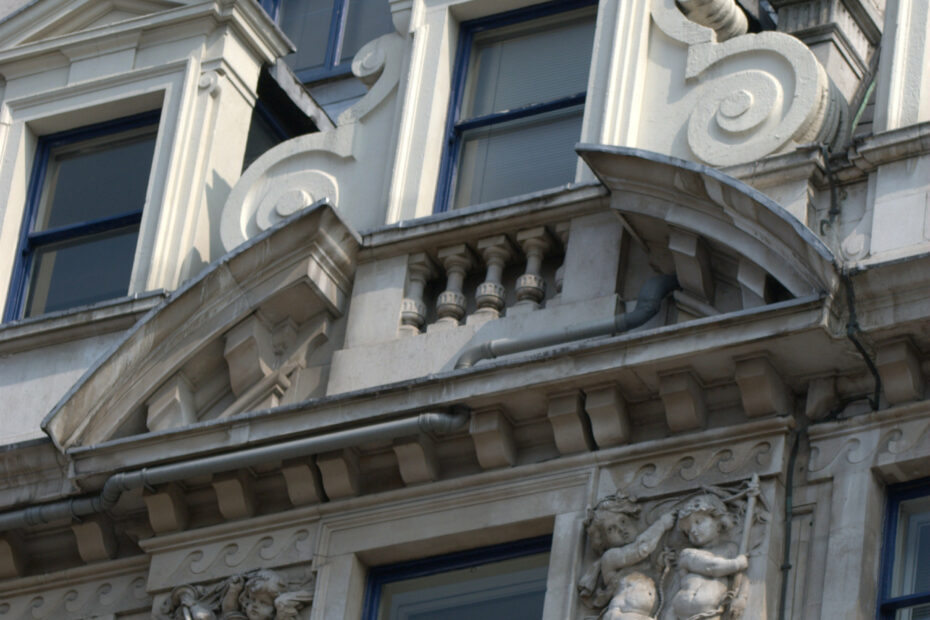 The former office of Thomas Cook are a good example of high-Victorian use of applied sculptural ornament to relieve mass but also to communicate purpose as shown by the references to travel displayed by the cherubs over the Fleet Street entrances, for instance.  The original portion was a concave-plan building of just nine window bays and faced squarely onto Ludgate Circus, itself created 64-69 when the Holborn viaduct scheme was implemented.  In 1906, as Thomas Cook needed more space, the building was extended along Fleet Street by another ten window bays.  It is likely that the dome surmounting the central bay on Ludgate Circus was added at this time, as early images do not feature this element.

Details include richly aedicualted entrances at Nos. 107 and 111, one with scrolled and the other with triangular pediment; cast iron balcony and decorated window lintels along the whole of the third storey and alternating stone balustrades and balconies on the fourth. There are further sculptural groups just below the cornice.  The dome is surmounted by a trio of cherubs that formerly supported a globe and a weathervane.  An oft-reported curiosity about this building is that it still contains one of the oldest operational lifts in London which was featured in a fight scene in the James Bond “Diamonds are Forever” film.

Thomas Cook began his activity by organising railway transport for temperance movement supporters going to meetings.  According to their website the “first commercial venture took place in the summer of 1845, when he organised a trip to Liverpool. This was a far more ambitious project than anything he had previously attempted, and he made his preparations with great thoroughness. Not content with simply providing tickets at low prices – 15 shillings for first-class passengers and 10 shillings for second, [Cook] also investigated the route and published a handbook of the journey. This 60-page booklet was a forerunner of the modern holiday brochure.”  The company grew rapidly and was instrumental to opening foreign travel to the rising middle class, first in Europe and later further aboard.  Among other achievements, Thomas’ son, John, handled the entire logistics chain of the 1884 military expedition to rescue General Gordon, in Khartoum. This involved moving 18,000 troops and 80,000 tons of cargo.