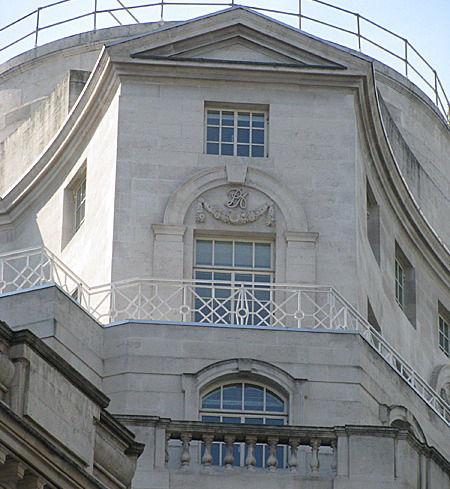 Next to St Bride’s Church and across the street from the iconic Daily Express Building, the former headquarters of Reuters and the Press Association is another reminder of the centrality fo Fleet Street to the history of British and indeed international journalism.  Curiously, this was previously the site of the satirical periodical Punch.

The plan of the building has a comparatively narrow frontage, along Fleet Street, and a longer, deeper extension down Salisbury Court.   Within a decade of tis construction, such Portland stone palaces would be considered probably too expensive and certainly reactionary in taste, but this listed building has survived the test of time and judgement of posterity unscathed.   Working to an evidently ambitious and formal brief, here Lutyens, by then among the most prominent architects in Britain, stuck to a tried-and-true approach that is visible in other inter-war creations of his.  Overall, however, the classicism is a bit more stripped and stylised than, say, Midlands Bank or Britannic House (q.v.).

The organisation of the elevations is tripartite, with an astylar Doric, rusticated base that encompasses the  ground floor and attic storey, four successive storeys of plain ashlar and barely hinted pilasters and then a recessed further two storeys a concave facade and pedimented gables.  There is a slightly post-modern flavour to the whole.

The most dominant element, besides the rather fanciful roof-line articulation, is the central arrangement surrounding the main entrance.  This features a markedly recessed doorway flanked by boldly-executed terms. This is encased in an equally pronounced arch, beneath witch a large oculus window serves as background to a bronze sculpture of Fame.  The “PA-R” initials of the commissioning companies are visible in an escutcheon above the entrance arch as well as the spandrels near the top.

Reuters (now Thompson Reuters, located in Canary Wharf) remains one of the main news agencies globally.  Founded in 1851 in London by Paul Julius Reuters, it pioneered rapid transmission of financial prices and relevant news by carrier pigeons and, soon thereafter, telegraph.  Reuters ‘broke’ many historic events to the wider world, including the assassination of President Lincoln (1865) and the erection of the Berlin Wall (1961). The Press Association was a collaborative effort between regional newspaper publishers, aimed at using the telegraph to distribute news more reliably than had bene accomplished previously. Operating since 1870, between the 1920s and 1990s, it was intricately connected via shareholdings to Reuters and that explains the co-commissioning of these impressive offices.