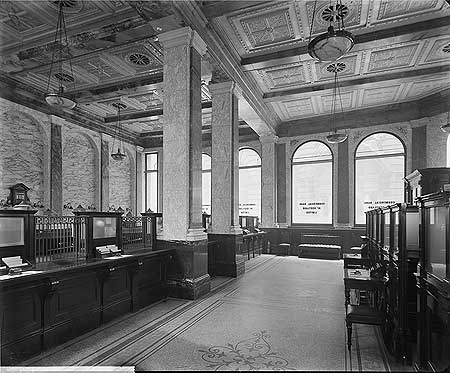 The main decorative elements are the choice of contrasting granite colours for the columns and rather stubby balustrade fronting the first-floor windows. Both main entablatures are simplified, with a Vitruvian scroll in the lower cymatium and no carving whatsoever in the otherwise nicely profiled upper cornice. The upper stories are in a more stripped, astylar look but their simplicity avoids any clash with the admittedly more accomplished lower stories.

The main entrance is at the cut-away corner with Birchin Lane and carries over the overall, restrained composition Near it hangs the sign of a castle with the initials “TSB” and the date 1810, commemorating the origins of the Trustee Savings Bank, later merged with Lloyd’s. Although this building is registered in the English heritage site as ‘Royal Bank of Scotland’ it was in fact commissioned by the Commercial Bank of Scotland.