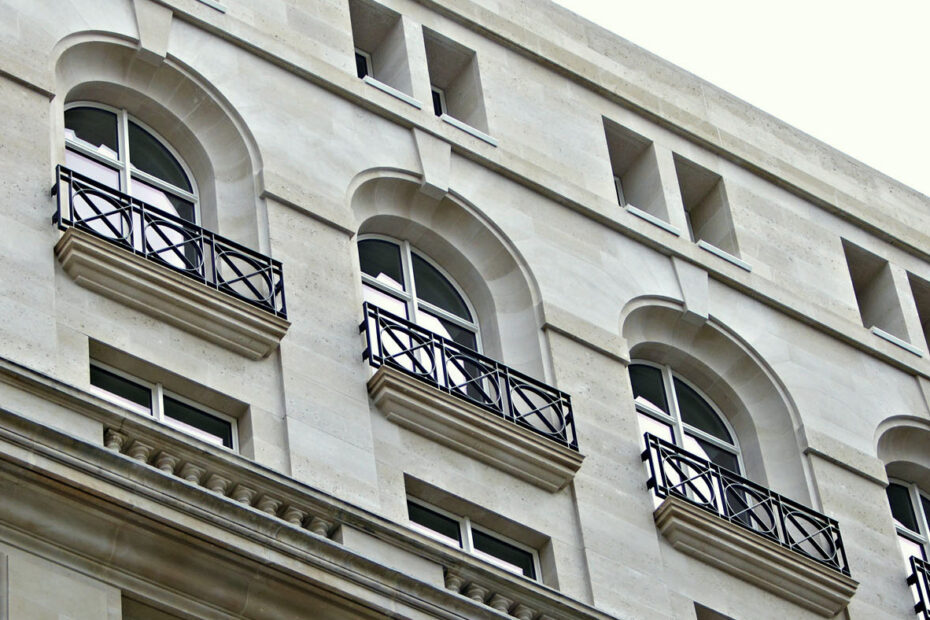 Like many buildings in the City, all that remains of the original edifice at 1-4 Bartholomew Lane are the external walls, largely in an inter-war Stripped Classical style.  The considerably more Modernistic interior details, which were considered sufficiently notable to be recorded photographically by RIBA at the time, have been lost.  It is emblematic of the City’s rather careless attitude towards architectural history that this 2011 facadectomy was nominated for the City Heritage Award.

The Alliance Assurance building of 1932 presents as slightly asymmetrical principal aspect of nine bays along Bartholomew Lane, with a five-bay return along Throgmorton Street.  The base section is marked by a giant, two-storey Tuscan order of engaged columns and coupled pilasters around the entrances.  Between the vertical elements, the wall consists largely of a screen of metal-framed windows.

The central band of three successive storeys as well as the attic storeys are quite spare, with plainly framed apertures and banded rustication at the corners.  Above that, we find four storeys with progressive setbacks, where the corner element is concave, unlike the convex shape for the first 5-6 storeys.  The terminating portion features a sort of central frontispiece that is aligned with the principal plane of the building and not set back.

The overall effect, thanks to the use of locally prevalent Portland stone cladding, is in harmony with the nearby Bank of England and other Lothbury offices.  Not, perhaps, as striking a building as its neighbours but better behaved than other nearby additions such as the former Stock Exchange Tower of remarkable sterility and unoriginality.

It is worth noting that, pre-1932, different sources show both the Alliance Assurance (or even “Allied Insurance”) and Allied Bank occupying part of the current plot.  As far as we can determine, these were entirely separate companies with a confusingly similar name.  The Alliance Assurance was founded in 1824 by City grandees Rothschild and Montefiore and also received the support of prominent firms like Overend Gurney and Barings.  It was meant to circumvent the monopoly by Lloyd’s of London on maritime insurance and provide better terms, being capitalised at the then enormous sum of £ 5 million.  This company was established in Bartholomew Lane no later than the 1880s, based on primary documentation.

Later mergers led to the creation of Sun Alliance Insurance (1959) and later yet to Royal & Sun Alliance Group (1989); having already absorbed London Assurance (1965) and Phoenix assurance (1984).  Some sources suggest that the offices on Bartholomew Lane were retained after the 1959 merger.