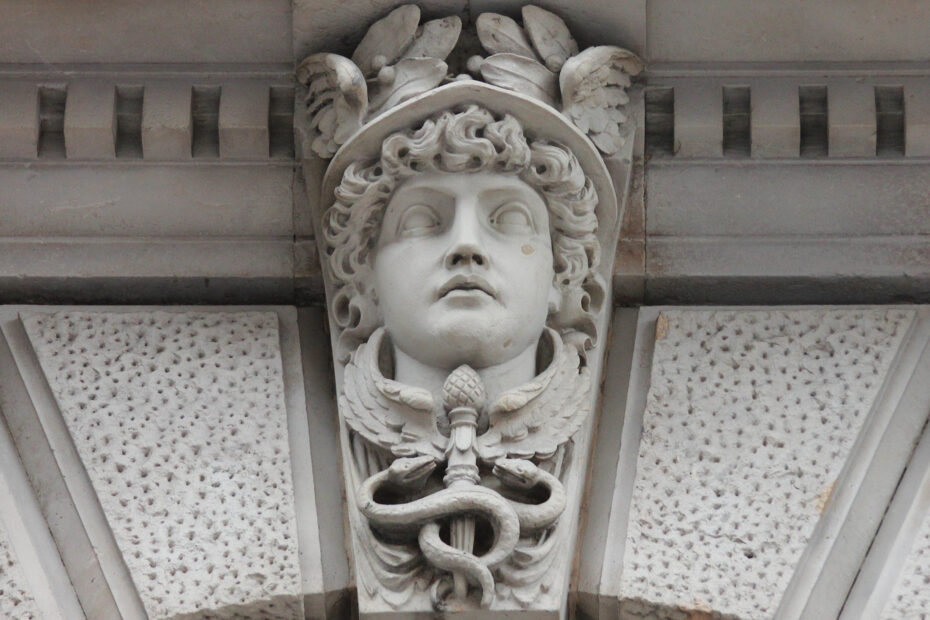 Between 1725 and 1900, this was the location of a large building known as South Sea House, headquarters of the eponymous South Sea Company.  Rebuilt-after a fire in 1826, it was vacated by the South Seas Company after its dissolution in 1853.  From 1857 to 1900, the Baltic Exchange was based here, after which South Seas House was demolished to make way for the current building.

The commissioning client, the British Linen Bank (see below) had offices in London on Lombard Street, for most of the 19th C.  At the turn of the 20th century, it decided on grander, larger premises and the resulting building is still largely visible at the NE extremity of Threadneedle Street. Anderson’s design exhibits both an Edwardian sense of grandeur and, at the same time, a more measured set of proportions and simplicity for the main plan.  It rises to five full storeys but retains an emphasis on horizontality, with its 11 window bays.  In the best classical tradition, it benefits from tripartite division both vertically and horizontally.  The two lateral sections (in antis) are only modestly projecting, with turret-like chimney stacks highlighting the divisional effect without the need for sharp articulation of the subjacent mass.  It is thanks to such considerations and, especially, the profuse subsidiary elements and sculptural details that the sense of richness and ceremony is achieved.

The lower portion consists of a basement and raised ground floor with body channelled, alternating rustication, Doric pilasters and agraffes on every keystone of the segmental windows. The intermediate section features a giant, two-storey Corinthian order, culminating in a full entablature. An attic storey and mansard roof follow, above. In horizontal organisation terms, the antae are distinguished by a thickening of the vertical elements, so that the Doric pilasters of the central section become piers and the engaged columns become pilasters (doubled at the corners).

The entrances also deserve mention.  The central doorway features a Doric aedicule with a compound pilaster-plus-engaged-column feature and other Baroque elements like blocking, projecting entablature over the columns and an open-bed, segmental pediment with a high-relief tympanum.  The latter consists of a typical allegorical group that includes a central figure of Britannia and cherubs bearing commercial devices like a scale and spinning wheel.  There is also a secondary entrance at the NE extremity, between the main body of this building and the National Provincial Bank offices, next door.  The high-relief carving of two sailors, above the entrance arch, is supposed to be the work of sculptor John Bacon Jr. and the story is that the South Sea Company had commissioned this work but never paid for it.  Anderson is meant to have then purchased and installed it, some decades later.  The grill-work in the arch itself, bears the inscription South Sea House.  The British Linen Bank building was partly remodelled, especially towards the rear, by Dennis Lennon & partners (1980-81).  However, some of the interior details of the former banking hall have been retained.

The British Linen Company was established by royal charter in 1746, in Edinburgh to ‘carry on the linen manufactory in all its branches’.  As was then common among large-scale merchants, it gradually began to offer transactional and other banking services to suppliers and customers and by the late 1760s it was sufficiently engaged in the banking business to start issuing its own bank notes. By the 1800s, it was more bank than manufacturer or merchant and this was formally recognised in the early 1900s, when it changed its name to British Linen Bank, still mostly based in Scotland.  It became a subsidiary of Barclays in 1919. The latter later sold it to Bank of Scotland in 1970 and the last use of its name ended in 2000.