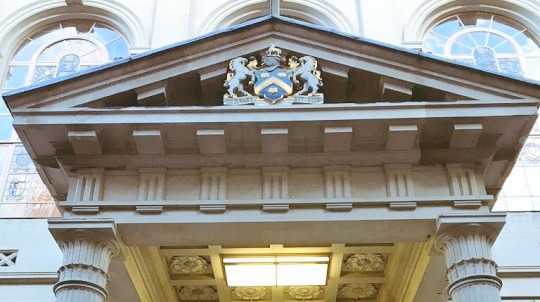 The current permutation of the livery hall of the Company of Saddlers is arguably among that small proportion of post-war City buildings whose reputation is due an upgrade.  In the most recent edition of Buildings of England, it is still critiqued as “stilted Neo-Georgian; a disappointment after [Sullivan’s] jazzy inter-war work in the City” and the centrepiece of the Adam-style decoration of the Great Hall, its ceiling rose, is described as “overblown”.  While it is true that L. S. Sullivan designed some fine Stripped Classical and Art Deco exteriors in the 1920s and 1930s, his implementation of an evidently conservative brief is far from unconvincing.

As one of the older livery companies, the Saddlers received their first royal charter in 1272, with more to follow.  Their first hall, of 1427, was very close to the current location and, in one form or other, the Saddlers’ Hall has been at or adjacent to its current location ever since.  The Tudor-period hall burned down in the 1666 fire, being rebuilt in 1671.  That, in turn, burned down in 1821 and was rebuilt to Jesse Gibson’s design (1822-23).  The portion of Gibson’s building facing Cheapside was re-fronted in 1864-65 and is visible on the left, below, with arched windows and ground-floor storefronts.  The image on the right shows the post-Blitz damage (1940) which resulted in the latest building being necessary.  Due to post-war rationing of private-sector construction, rebuildng did not start until 1955.

Although the building consists of eight storeys (with a ninth added in 1970), from the narrow confines of Gutter Lane, the visual focus is provided by three lower stone-clad ones, as the successive (brick-clad) floors are set well back.  The visual distinction reflects usage also, since the Saddlers utilise the lower portion (and basement), while the upper storeys are rented out as offices.

The aforesaid stone-clad aspects along Gutter Lane are quite orderly and dignified, without Baroque flourishes. The central section of six bays consists of a rusticated ground floor with segmental headed windows as well as two successive storeys defined by a stylised giant Ionic order of pilasters.  The window casings and mouldings reference a convincingly “City Classical” idiom, with non-pedimented, astylar trabeation at the Piano Nobile and low-relief side scrolls framing the third storey windows.  The lateral sections are slightly recessed, with a single-bay and porte-cochères.  The window arrangements here reproduce those of the main body.  The ends also benefit from a visual vertical extension in the form of attics and, above and recessed from those, pedimented projections at each end.

Uncommonly for most such buildings, the ‘rear’ entrance and aspect are of comparable quality.  An entrance court (landscaped in 1989 by James Welch) is accessed from Foster Lane, next to the church of St Vedast alias Foster.  The key feature of the ground floor, here, is a Doric porticoed entrance and the double-height windows of the great hall.

A noteworthy detail is that the necks and echini of both Ionic and Doric capitals feature a palm-frond arrangement that recalls, but does not exactly reproduce, the ‘Tower of the Winds’ order.

The main procession of ceremonial spaces consists of the Livery Room, Court Room and Warders Room, running N-S along Gutter Lane, then the windowless Tunnel Room (along the southern end) and lastly the west-facing Great Hall overlooking the rear court.  The interiors are in late-Georgian neoclassical style