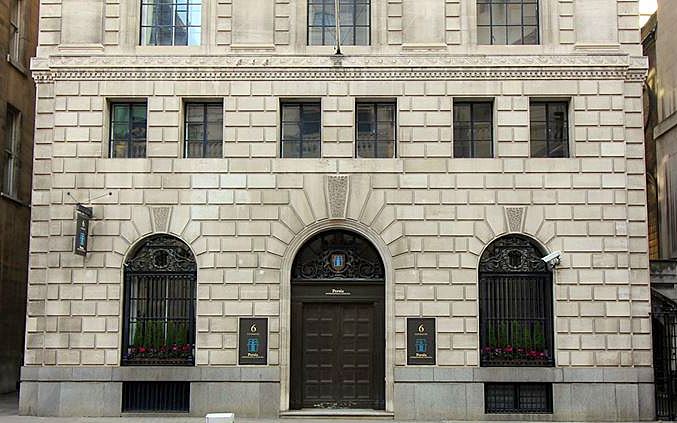 The Royal Bank of Canada (RBC) offices on Lothbury present a relatively narrow Classical facade vs. deeper, much plainer lateral aspects.  The building is moderate in scale and deliberate in detail.  The base element of ground storey and mezzanine features the rather flattened, almost stylised rustication popular in this period and a simplified, almost implied, Ionic cornice. The central entrance and main windows are arched, with reticulated keystones and fancy bronze scrollwork in the segmental upper portion.

The rustication extends above the base to the main section where it is subjacent to low-relief, giant Corinthian pilasters.  A Piano Nobile is marked here by pedimented windows.  There is a charming Renaissance flavour to the carvings of the principal frieze.  Above the main cornice, one finds a restrained but orderly attic storey.  All the facing is of Portland Stone.

The relative narrowness of the principal aspect requires no horizontal partition, other than subtle recessing just before the inverted corners.  An overall pleasing and dignified aspect not atypical for the City of this period.

Also distinctive of the place and time, is the unapologetic recourse to Classical Palladian devices with very little concession to Modernist trends, even though Stanley Hall, Easton & Robertson was a firm well versed in Art Deco and Moderne designs, by this time. It is difficult to discern if the conservativeness of the design is due more to the location and purpose of the building or the influence of RBC’s very active Chief Architect, Sumner Godfrey Davenport, whose body of work is predominantly Neoclassical.

The Royal Bank of Canada name was created in 1901 but the existing Merchants Bank of Halifax was founded back in 1864.  Its first London Branch was opened in 1910, with a staff of four, in Princess Street.  Despite the massive repercussions of the Great Depression on Canadian business, no Canadian bank failed (RBC did come close) and proof of this relative solidity is the fact that in 1932 they commissioned a prominent London firm of architects to build new premises at this prestigious address.