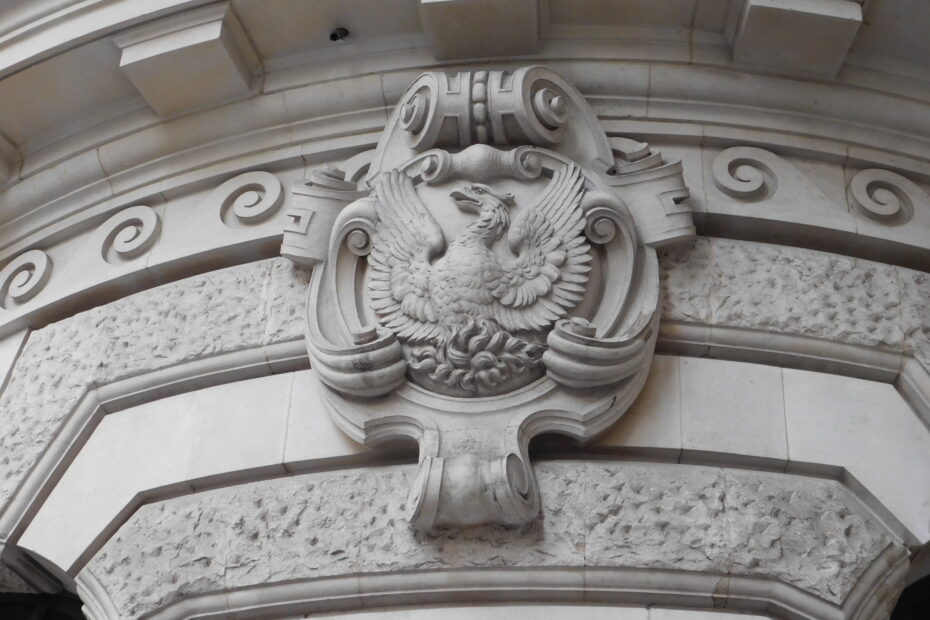 Like many of the larger City offices, this building has a rather complex history of construction and rebuilding.  The oldest portion of what was originally known as Phoenix House, fronting King William Street, was designed in 1915 by JM Anderson and HL Anderson.  Presumably due to the intervening World War, the actual construction took place in 1921-22.  After just a decade, in 1932, the building was extended southward along Sherborne Lane and Abchurch Lane (four bays added to the existing three) to a design by Campbell Jones & Sons.

In the mid-1980s, the interior was almost completely rebuilt, with the original façade, central entrance hall area and some first-floor rooms being retained.  At this time, the building was further extended along Sherborne Lane, all the way to Abchurch Yard.

The main compositional elements of the King William Street façade, consisting of 3+5+3 bays, are the rusticated ground floor, giant Corinthian order in the main body, elevated roofline over the antae and sculptural embellishments around the main entrance.

The ground floor is vividly rusticated, with alternate plain and cyclopean finish, a Vitruvian scroll and simplified Doric entablature. The floors above are divided into a base, piano nobile and attic, unified by a skilfully carved and well-proportioned Corinthian order of pilasters (in the antae) and columns (in the central section).

A wealth of further detailing includes band friezes and sculptural reminders of the building’s original occupant. A bronze phoenix nestles within a broken segmental pediment that rises above the main entrance supported by double, blocked Doric columns. The same mythical bird adorns the ornate signpost clock that still projects from the façade.  The central windows in the antae feature a complex astylar aediculation.

Note that the two lateral entrances on King William Street were originally functional, since the north and south portions were rented out to tenants.  Architectural drawings relating to the 1932 extension show the Dominion Bank of Canada and National Bank of Egypt, there.  This is a similar arrangement to that of the even larger Scottish Provident building, nearby at n. 1-6 Lombard Street.  The ground floor entrance hall of Phoenix House is octagonal and features marble columns and pilasters, an arcaded gallery and a glass dome.

The first insurance company to be associated with the phoenix image was the Fire Office founded by Nicholas Barbon in 1680.  Barbon, a physician and son of Cromwellian firebrand Isaac Fear-God Barbon, became a successful property developer following the Great Fire (as a well as a noted economist and financier).  He founded what was the first private insurance company in British history.  One of his innovations was the formation of a private fire brigade, wearing red livery and originally recruited among watermen, which would put out fires in insured buildings. The latter being identified by a metal ‘fire mark’ (another of his innovations).  Many competitors were founded and at some point, in the 18th C. it appears the original Fire Office ceased to conduct business.

In 1782, a group of sugar refiners and merchants set up a fire insurance company in response to the extortionate rates and low insurable amounts offered by existing companies to that fire-prone trade.  This company was named the Phoenix Fire Office, also identified in some documents as the “Second Fire Office”, referencing Barbon’s creation.   Renamed Phoenix assurance in 1901, it  gradually expanded into other lines of business (life, contents, marine, etc.) via a variety of subsidiaries.  The Phoenix Assurance was also the first major British exporter of insurance services. Sun Alliance (later, Royal Sun Alliance), acquired Phoenix Assurance in 1984.

The Phoenix Assurance company was based at N. 19, Lombard Street through the 19th C. The company was based at N. 5, King William Street between 1922 and 1983.  Having become a division of a larger group, it moved to a new building further down the street, at N. 18, which took on the “Phoenix House” name. Although many long-lived companies have published business histories, Trebilcock’s 1985 account “Phoenix Assurance and eh Development of British Insurance” remains one of the most well-researched economic histories of the development of that industry and a specific company.