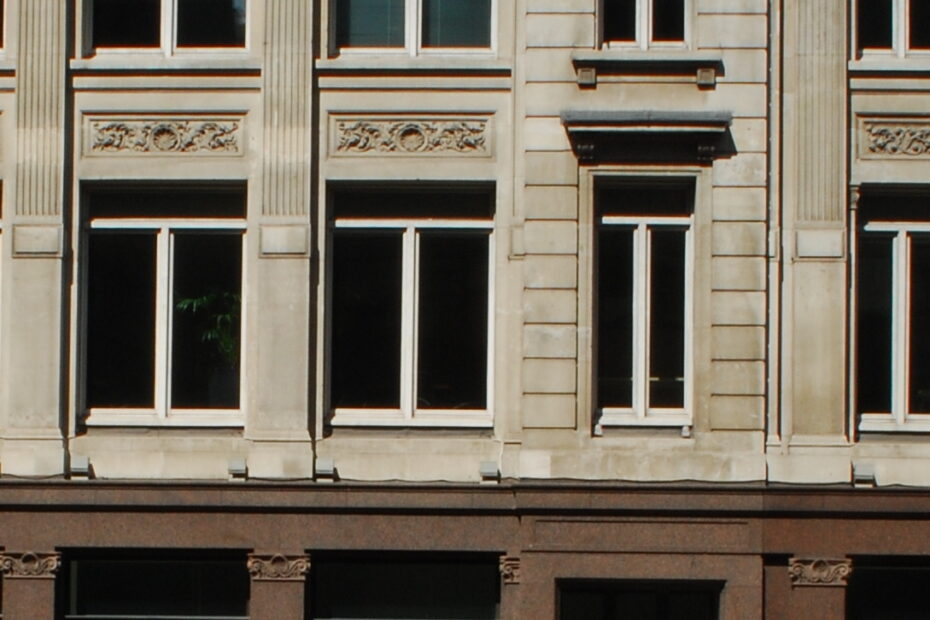 Though perhaps not as profuse in detailing or graceful in articulation as some of the more iconic buildings along Bishopsgate and nearby Cornhill and Threadneedle streets, this building is exemplary of the more common speculative office buildings on this period. It is instructive to see just how good a ‘workmanlike’ building of this time could be, therefore. At the turn of the 19th century, it housed Yokohama Specie Bank, which for several decades was the main Japanese financial presence in the City of London.

As in any self-respecting classical palazzo, the foremost element of articulation is the division of the facade between vertical elements and horizontal organisation. The former are supplied by the linear superimposition of shallow pilasters (in a rather freely interpreted pseudo-Corinthian order) that unifies the different storeys and facing materials. Additionally, two piers corresponding to the entrance bays also rise over the whole facade, being underscored by the channelled ashlar and the terminating open-base pediments.

The horizontal elements of note include the polished purple-brown granite facing of the ground storey, the carved panels between the second and third storey, the main dentilled cornice and the rectangular-profile balustrade above the attic storey. Though not fully symmetric, the Bishopsgate aspect is nonetheless very orderly and, despite very generous fenestration, it retains a sense of dignified solidity.