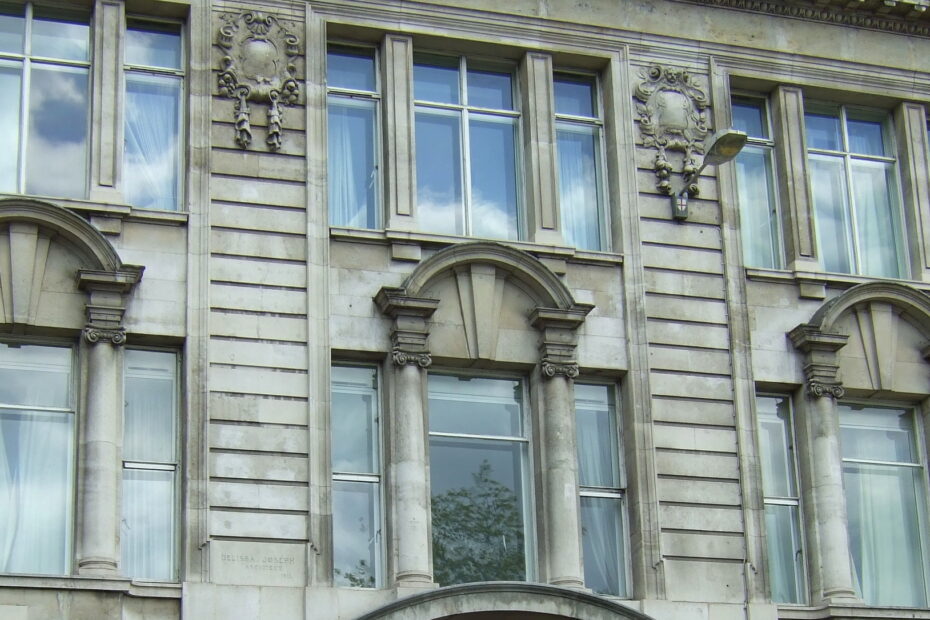 The solid Portland stone pile at the corner of Seething Lane and Byward Street is effectively one building erected atop another.  The ground storey formed the above-ground portion of a Metropolitan Underground Railway stop, known then as Mark Lane Station. That structure was stood separately from any other buildings.  In 1909, that station structure was replaced by one designed by George Sherrin. It is still visible as the arcaded, rusticated ground storey of n.16.  In 1911, a further four storeys of office space were built on top of the existing structure.  These originally housed the London offices for the Dutch van den Bergh margarine manufactory, a precursor of Unilever.  That addition was designed by Delissa Joseph.  The station itself later was renamed after Tower Hill.  In 1978, a new Tower Hill Station was built east of Trinity Square and the existing station was remodelled extensively by Haslemere Estates.

While the lower, Sharrin-designed portion is serviceable enough and boasts three well-delineated entrances (one at the extremity of each aspect and one on the canted corner), the upper storeys offer greater visual interest.  The tripartite windows on the piano nobile are contained in an aedicule consisting of a subsidiary Ionic order and an open-base segmental pediment.  The piers separating each bay display channelled rustication and, in lieu of a capital, high-relief cartouches at their summit. A cast-iron parapet runs along most of the attic storey, above the main cornice.  We agree with the Corporation’s conservation area redactors that “Nos. 14 and 15 Trinity Square form a townscape group with No. 16 Byward Street and 32 Seething Lane, subservient but complementary to the imposing former Port of London Authority building. This group contributes greatly to the setting of the two listed buildings that border Trinity Gardens.“