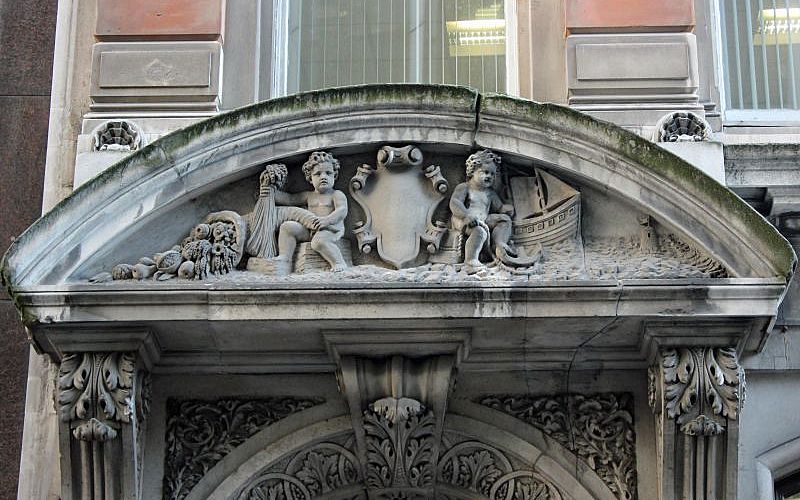 Billiter Street runs between Fenchurch Street and Leadenhall Street, in the heart of the insurance district.  There are several versions of the origin of the name of Billiter Street but the most probable seems to be a reference to ‘bellezeters’ (a bell foundry).  Old timbered buildings survived here until 1775, when they were replaced by East India Company warehouses and then offices.

The building at 19/21 Billiter Street was erected in 1865 as generic commercial offices. In the 1884 Wreck Report for “Viatka”, this address is given for the shipping magnate and later MP for Kingston upon Hull (1865-1874) Charles Morgan Norwood. From 1892 to 1903, it housed the London Shipping Exchange.  This exchange specialised in liner (passenger) shipping and it was partly a competitor to the Baltic Exchange with which it merged in 1900.  In 1930, the building was refurbished at which time a new central door arrangement was introduced.

The facade is rather long, relative to the building height and the horizontal arrangement is emphasised by understated columnation vs. pronounced cornices. At each end, two rusticated bays feature alternative entrances to the main, central aperture. In succession, a basement incorporating a reticulated podium supports a modified order of engaged Doric pilasters that separate large segment-headed windows. The first-floor windows are more fully rounded and narrower, paired by alternating small ionic columns and simple, anta-like pilasters. As the floors rise further, the window treatments tend to become simpler.

Both the segmental pediments surmounting the two lateral entrances and the bottom three cornices are supported by intricately carved console brackets. The channel jointed, segmentation of the bays at the extremities features alternating colours, with the whiter stones being prismatic in profile. The archivolt of the aforementioned lateral entrances sport carved leaf and hoop patterns while the pediments above contain bas-relief with nautical motifs.

The first-floor spandrels are covered in detailed arabesque and include four masks that appear to relate to continents or people of the world, in keeping with the shipping and trade theme. The ‘light’ of the bronze 1930 door casing looks jarringly Art Deco, here, but the swags, wreaths and fasces below are well-executed.

This building is amusingly eclectic in style and composition but its relative ornateness is gracefully applied, overall, and rescues what would otherwise be a dull, long facade.