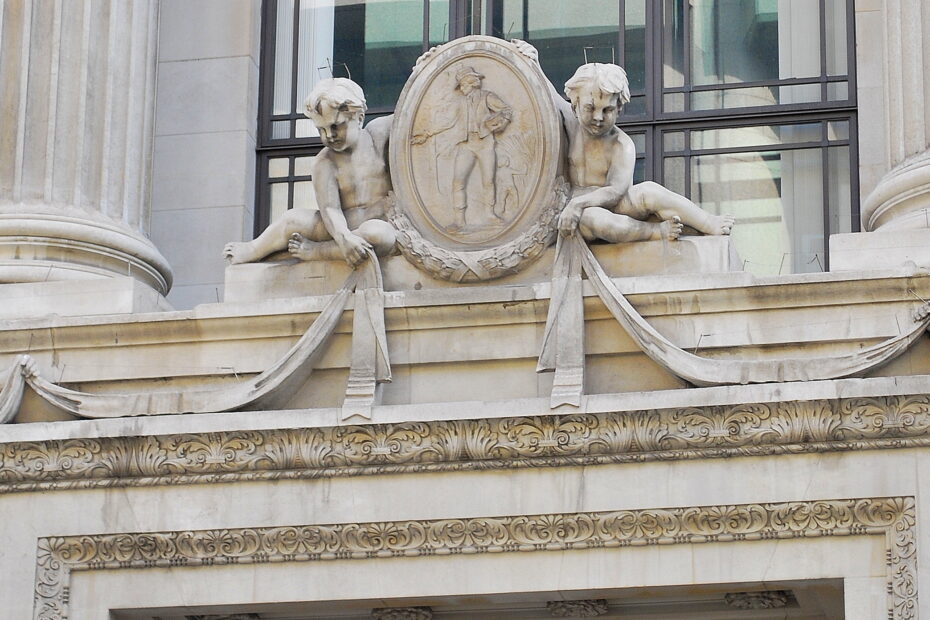 At first glance, the symmetric, Neoclassical, Portland stone façade of this building seems rather typical of insurance headquarters of this period. The vertical partition follows a common subdivision between rusticated ground floor, main body followed by an attic and mansard roof above the main cornice. Similarly, the horizontal geometry features antae and a giant order in the central portion.

On closer examination, a number of interesting details can be observed.  First of all, the original plan is markedly triangular in shape, with the broad façade hiding a rather more complex layout behind it.  The antae feature an interesting series of ressaults at the corner and before the monumental aedicules, which are topped by broken segmental pediments featuring allegorical figures. These represent prudence, foresight, security and unity and are the work of Herbert Palliser.  The giant Corinthian order consists of two laterally engaged columns on each side and two sets of coupled, free-standing ones.

The framing of the central entrance is relatively spare, relying simply on mouldings for depth but also features four cherubs (by Charles Hartwell), two of which support the corporate emblem in an oval cartouche.  Furthermore, the ashlar above the base achieves a degree of openness thanks to large windows and nearly flush bronze aprons. Overall, the impression is of sophisticated, subtle detailing with less movement and plasticity than earlier grand facades of the 1900s and 1910s.

The London Life Association was founded in 1806 as a mutual life insurance undertaking.  The principle of it was that, as a non-profit organisation, its participants would benefit from diminishing premia as their tenure in the association increased.  Having absorbed some other mutual insurers, it was eventually taken over in 1989 and ceased writing new business in 1995.  The London Life Association moved to this address in 1838, but evidently required updated headquarters in the 1920s.