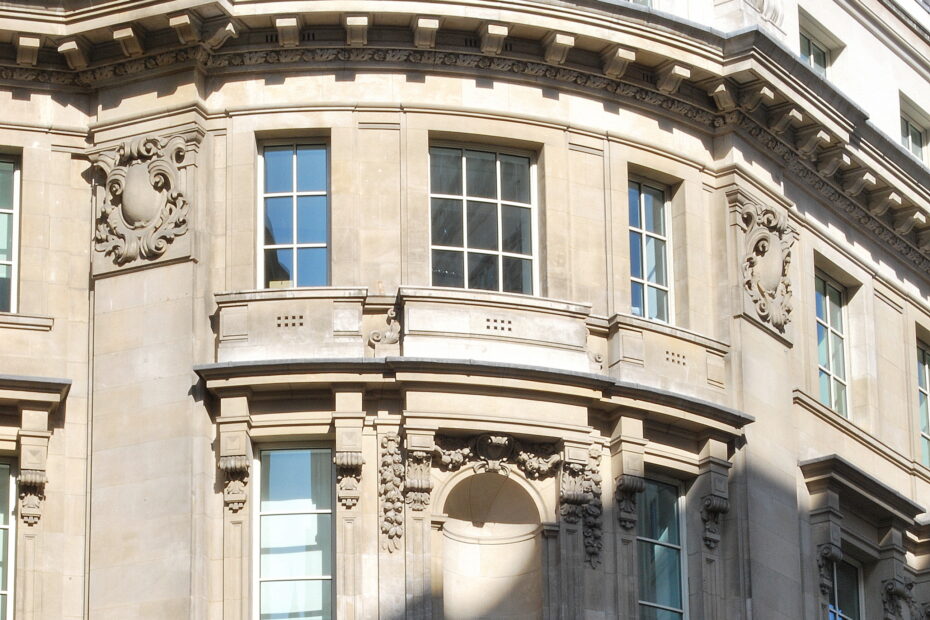 This building is one of several erected along King William Street in a 1920s wave of redevelopment.  The commissioning client was the long-established London Assurance Co.

The articulation and composition of this building are rather unusual, being based on a roughly triangular plan with the apex located at the corner of St Swithin’s Lane with King William Street and the main axis running at an angle from that point towards Sherbone Lane. This arrangement is untypical, with most other buildings along King William Street facing the main road squarely, despite the sharp angles at which the older, intersecting streets meet the main thoroughfare. A further idiosyncrasy is the near-hexagonal shape of the large entry hall being extended over the full height of the building, resulting in unusual angular recesses on the NW end of the King William Street and St Swithin’s Lane elevations.  Yet more articulation is introduced by the semi spherical exedra placed at the corner with Sherbonre Lane which is accentuated by a terminating tower composed of drum and cupola.

Despite all the compositional whimsy (verging on arbitrariness), a degree of unity, grace and dignity is retained via the judicious application of well-behaved Classical detail.  Among them we would enumerate regular fenestration, the banded rustication along the first storey and lower ground floor, balustraded balconettes along the second storey, pedimented windows on the third storey and a pronounced cornice on the terminating entablature.

In 1996, the 1920s building was incorporated into a larger suite of offices along St Swithin’s and Sherborne lanes.  These, in turn, were re-faced and refurbished in 2017 by Allford Hall Monaghan Morris.  Neither incarnation of those thoroughly utilitarian additions needs concern us, here, save to note that the later version won the RIBA London Award for that year.

The London Assurance Company was founded in 1720.  As an insurance company, therefore, it came a decade later than the Sun Fire Office of 1710.  It was however, one of the first two joint-stock insurance companies to be incorporated thanks to the “Royal Exchange and London Assurance Corporation Act 1719”, popularly known as the “Bubble Act”.  This oligopoly status was strongly challenged by the many privately owned insurance companies as well as Lloyd’s ‘names’ but the founder overcame such opposition by promising George I to donate the enormous sum of £ 300,000 to defray government debt. A grateful king then pressured Parliament to grant that special status (which lasted until the repeal of the act in 1824) even though ultimately only about £ 150,000 was paid against the national debt.  Incidentally, private-capital insurers proved perfectly able to compete against the chartered insurance companies.  It should be remembered that the company was founded around the time of the infamous South Sea Bubble (in the UK) and Law’s Mississippi Bubble (in France). As a marine, fire and life insurer, the London Assurance had its own fire brigade in several locations (including an engine in Southwark, one in Threadneedle Street and a Thames-borne fire barge).  Having remained independent up to 1965, the London Assurance was then taken over by Sun Alliance.

From its founding to 1845, the London Assurance occupied various premises in the vicinity of Birchin Lane.  It then moved to the Royal Exchange where it remained until transferring to the building in question in 1922.  At some point after that, the firm of Cater Allen took over the premises until, in the 1990s, they were acquired by Rothschilds.  The latter intended to bid for the renovated building after 2017 but it was purchased by a pension fund and currently houses a number of unrelated companies.