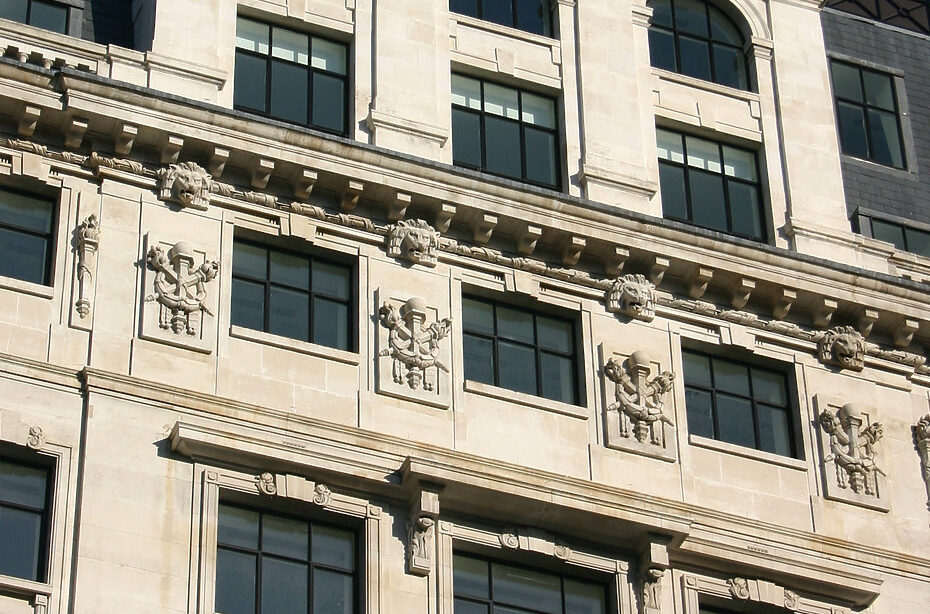 The lower portion of King William Street runs almost directly N-S, as it approaches London Bridge.  As such, it was the entry point to countless pedestrians and omnibus passengers going to work in the ‘Square Mile’.  Despite the prominence of the location, until the 1920s the only element of note at the junction of King William Street, Gresham Street, Eastcheap and Cannon Street was a statue of William IV.  Soon after King William Street underwent widening (in teh early 20th C.), the cluster of low-rise buildings at that location was redeveloped as a rather grand Neoclassical, 11-storey edifice.  Because of its prominent location, it has at times been referred to as the ‘Gateway to the City’, a moniker that was revived in the recent refurbishment of the site.

It should be noted that although the overall complex was designed to appear as a single building, in reality the 3/5th on the left (west) side were built to house the head office of Guardian Assurance, while the 2/5th on the right (east) side were occupied by a subsidiary branch of Lloyds Bank (headquartered in nearby Cornhill).  Everything behind the street elevations was re-built in 2000, although most of the original steel frame was retained.

The overall plan of the building is relatively simple but the rounding of the corners, the prominent turret, extended central elevation and mansard roof produce a heightened sense of movement.  The trabeated base consists of three storeys punctuated by channelled piers, Tuscan pilasters and, in the middle, lightly engaged Ionic columns. The middle section is less demonstrative, hewing to the large-window, astylar stripped classical that was becoming established at that time in the City.  Notwithstanding small changes in depth and returns, both of these elements wrap around the entire façade, promoting a sense of unity in what is effectively the combination of two separate buildings with distinct lateral entrances.

Above the 7th storey, the composition becomes more varied, with the central portion being clearly dominant.  it begins with an attic storey that alternates horizontal windows with stylised high-relief groups of torch motifs, surmounted by the principal cornice with a fasciated frieze featuring lions’ heads. An extension of the ashlar across three bays and two further storeys culminates in a turret consisting of a drum and cupola.  The style there is a partly simplified version of British baroque grammar.

As in the case of the Phoenix Insurance building, further up King William Street, this façade sports a large, projecting clock surmounted by the symbol of the commissioning client. In this case, it is a gilded owl, a symbol for Guardian Assurance in its later days.

Guardian was established in 1821 as Guardian Fire & Life.  As its range of business expanded, it was renamed Guardian Assurance, in 1902.  After being based at 11 Lombard Street for decades, it moved into these new offices in the early 1920s.  In 1968 Guardian Assurance merged with Royal Exchange Assurance to create the Guardian Royal Exchange Group, which retained these offices for several decades thereafter.   After the original insurance and bank occupants moved out, the lower floors became a House of Fraser department store, pipping Harvey Nichols to the post.  The former department store is scheduled to be redeveloped as a Corbin and King restaurant complex.