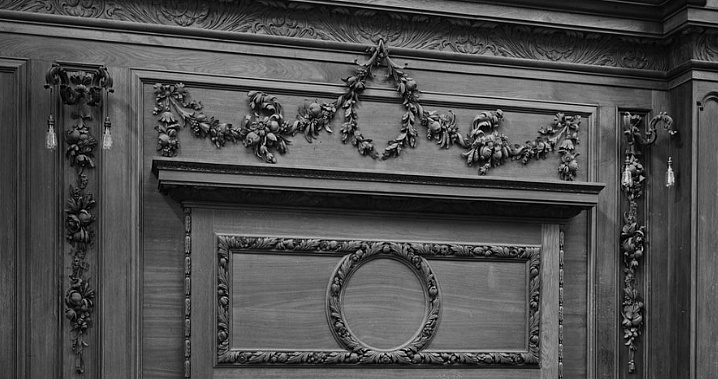 The front aspect of this largely brick building is defined by its symmetry and dignified composition.  The Portland stone accents, for instance, are strategically if sparingly used (capitals, entablature, entrance aedicule).  The ground floor is rusticated and features a prominent doorcase where scrolled brackets support an open-base triangular pediment which encloses the coat of arms of the hospital.  The second and third storey are bracketed by a giant Ionic order of pilasters and angled capitals.  Above the entablature, the central window opens from a segmental Dutch gable while the lateral ones are attached to a mansard roof.

Note, too, how the three central bays project very slightly forward. The side aspect, which used to face the narrow Water Lane, is less unified but still boasts a nice Serlian window and an aediculated doorway in the rear portion.  The side aspect continues the façade’s theme of Ionic order.

Following the dissolution of monasteries under Henry VIII, their leading role in the provision of what would today be called social services had to be re-created.  The young Edward VI, with the collaboration of the bishop and mayor of London, founded, in 1552, Christ’s Hospital to house, feed and educate orphaned and other poor children.   Following the Great Fire, which destroyed most of the Hospital’s buildings, there was a major rebuilding programme but another site, in Hertford, was also purchased.  In 1902, both the Hertford and London locations were closed with the pupils transferring to a new site in Horsham, West Sussex, where the school remains to this day.

After the move out of London, the foundation decided they would need to retain offices from which to manage their property and perform other functions (such as adminsitering admissions tests) in the capital and in the 1910s the current building was erected for that purpose.  Those offices were relinquished in 1986, when the building became a National Westminster Bank branch.  In 1995, the main area at the front was sympathetically converted into a Fuller’s pub.