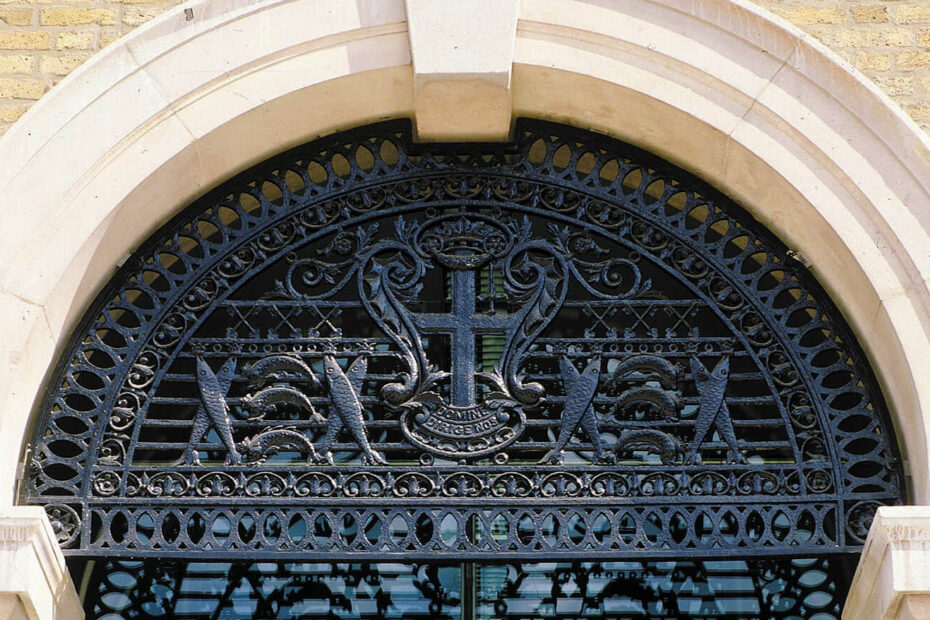 The former home of Billingsgate Market presents two noble, elongated frontages along Lower Thames Street and, of course, the River Thames itself.  The external aspects, of London Stock Brick trimmed by Portland Stone framing and detailing, wrap around a large, open market space that is surmounted by trapezoidal glass-sided roofs.

The supports for those roof structures is provided by cast-iron Doric columns while external access is via a multiplicity of arches. Both features successfully address programmatic requirements as well as aesthetic balance.  The two lateral wings serve as antae to the facades and housed office space as well as, in the original design, pubs.

The Lower Thames Street Façade is punctuated by 13 tall, capacious arches with prominent keystones that spring from Doric piers.  Its central section projects lightly, is entirely faced in stone at the ground level and is topped by a triangular pediment sporting an elaborate tympanum frieze as well stylised dolphins and a statue of Britannia in acroteria.

The Thames-side facade, which is generally better known and more easily viewed from the South Bank, is similarly based on a repeated modulus of 11 high arches.  Above the cornice, rather than a bold central element, it boasts just five lutherne windows (the middle one being larger) which are in greater harmony with the French baroque details of the lateral bays.  All arches, front and back, contain intricate metal screens with piscine motifs (see picture at top).

The side elements feature channelled rustication at ground level, superimposed Ionic piers over the next three storeys (one more than the main body) and fish-shaped weathervanes.

Following the departure of the fish market to Docklands in 1982, the building was reworked by Rogers Stirk Harbour in 1985-89, with the explicit aim of preserving virtually all of the original fabric and minimise intrusive additions.  Originally intended to become a vast trading floor for Citibank, after completion the client decided otherwise (some sources cite a lingering fishy smell while others point to excess water infiltration in the crypt/basement once the permafrost created by centuries of ice storage thawed).  The space is now used for conferences and other major events.

The name ‘Billingsgate’ applies to an early gate in the City walls (which some historians believe extended along the riverside), a large quay and dock on the Thames, a City ward and eventually to the market located there.

The first mention of the dock goes back to the 900s in King Ethelred’s ‘Laws of London’.  This remained one of the two most important docking sites in London, together with Queenhithe, into the late the Middle Ages.  A 1279 byelaw specified that all vessel docking at night had to do so at Billingsgate or Queenhithe.  It eventually overtook its ‘competitor’ by virtue of being downstream from London Bridge.

A market developed here early on with corn, coal and fish being its main staples.  In Elizabethan times, the market and quay became specialised in fish and, later, William III (1699) specifically regulated it as the main fish market for London.

In terms of buildings here, a drawing of 1589 shows sheds as part of the market.  The post-Great Fire buildings were replaced by a design by George Dance the Younger (1800) which in turn was expanded in 1852 to a design by James Bunning. The market was rebuilt and further expanded in the 1870s, covering the remaining portion of the dock and that building remains in place.  Although “by the late nineteenth century most of the fish arrived at the market via the Great Eastern Railway, water deliveries were made as late as the 1950s.