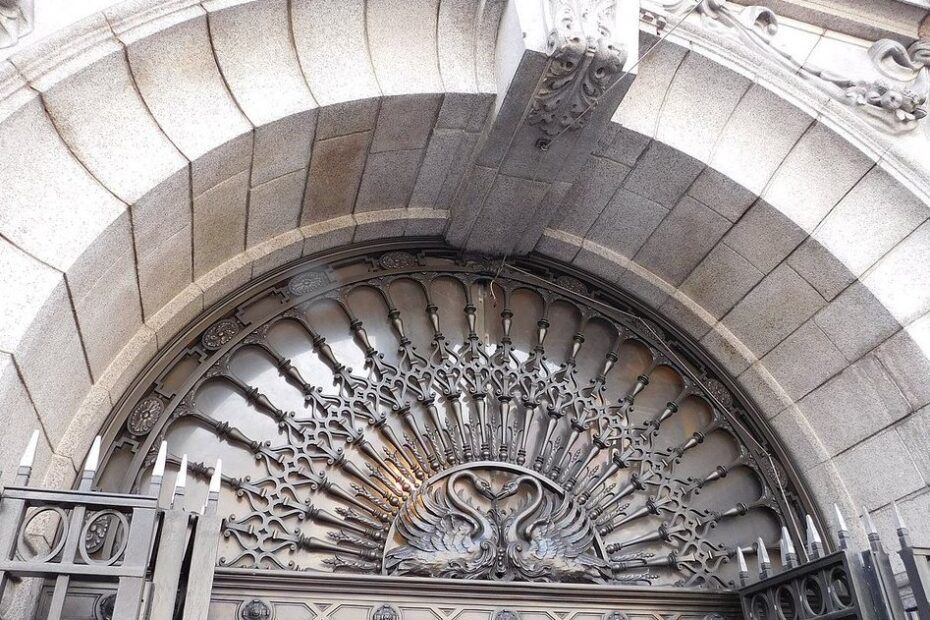 Ownership of this site by the Vintners probably goes back to the mid 14th c. but was formalised in 1446.  The original livery hall burned down in the Great Fire of 1666 and was re-built on a U-shaped plan (open towards Upper Thames Street) in 1671-75.  It is possible that the design was by Edward Jerman.  Although the 17th C. building remains the core of the current hall it has been greatly modified through the years.

In 1821-22 both wings were truncated to accommodate widening of Thames Street and the east wing was completely rebuilt to fit the approaches to the new Southwark Bridge.  A fuller transformation, still visible today, occurred in 1908-10, when the hall was extensively modified to a design by A. H. Kersey, who added a complex screen-facade along Upper Thames Street.

The most visible, Thames Street aspect consists of two, asymmetric portions divided by an archway with superimposed colonnade.  The unifying element of these three separate components is the use of channelled Portland stone throughout.  The west wing is windowless and monumental, though livened by the application of classical mouldings, blind oculi and a shallow projection of the ashlar in its central section.  Nonetheless, taken in isolation, the west wing looks more like a memorial than a building.

The east wing is a vivacious Edwardian Baroque composition with plentiful fenestration and a pronounced tripartite division. The intermediate storeys are accented by giant Ionic columns with angular volutes, projecting pedestals and entablature.  Above the cornice rises a Dutch gable with swags and other carved detail.  Nearly-rococo devices abound, such as the hefty consoles beneath the columns’ pedestals, the lugging around 1st and 2nd floor windows and the obelisks atop the bold lateral piers.

The interiors, unlike the facade, contain much more of a mix of 17th, 19th and early 20th century elements.  For instance, the Court Room retains its original character and is one of the oldest rooms in London in terms of continuous, unchanged use.

The Vintners’ Company originates from a guild-like association going back to the early middle ages, with 12th C. references to associations regulating the wine trade.  The first official charter was granted in 1363, establishing a monopoly over wine imports from Gascony (in exchange for herring and wool) and considerable enforcement powers over the wine trade in general.  Note that during the middle ages, wine was a major portion of English trade, accounting for nearly a third of total imports.  The concentration of vintners in this area led to the entire City Ward being named ‘Vintry’ and the parish church being referred to as St Martin Vintry (destroyed in 1666 and never rebuilt).

The Vintners’ privileges were largely removed during the 17th C. period of political turmoil and, on top of that, the 1666 fire destroyed both their hall and many other properties of the Company.  By the 19th century the Company was mostly a charity organisation though it retained some professional privileges.  A new charter with some legal powers was granted in 1973, however, reflecting renewed involvement in the wine trade.  Together with the Dyers, the Company of Vintners is one of only two livery companies that shares with the Crown the ‘ownership’ of the population of swans on the River Thames. The annual census-taking of the swans is known as ‘swan upping’.