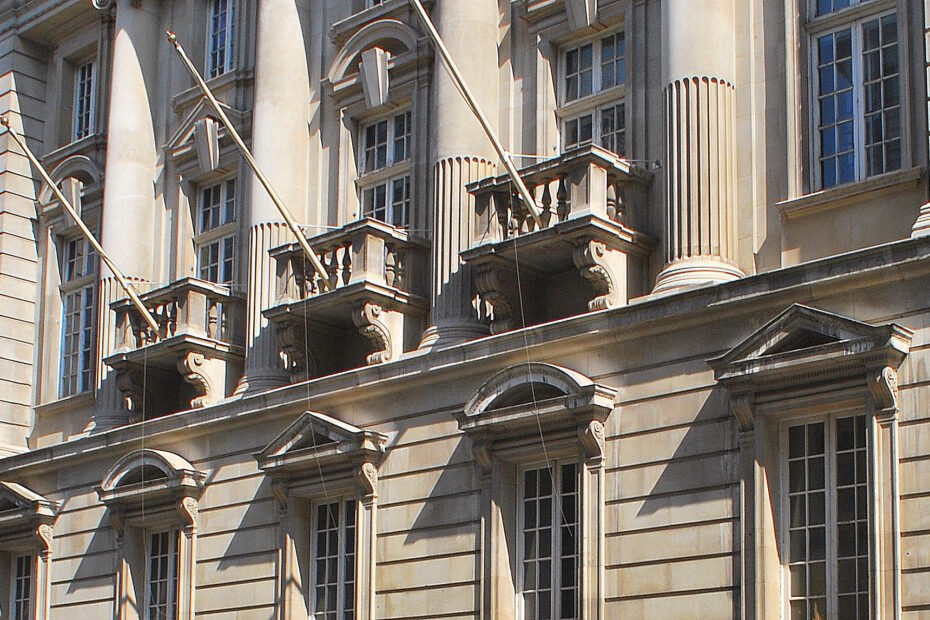 Gresham College is a rather unique institution, even by the often idiosyncratic standards of the City of London.  Funded by a bequest of Sir Thomas Gresham, it employs a number of professors but, rather that holding regular classes and conferring degrees, it holds free scholarly lectures.  After the death of Gresham’s widow, it was housed in Gresham’s former mansion, near Bishopsgate, where it remained between 1597 and 1768, when the property controversially was subjected to compulsory purchase by an act of Parliament.  Following this, lectures were held in the Royal Exchange.  In 1838, Professor Edward Tailor condemned the ‘ruthless barbarism’ of the 1768 Act and eventually the slight was righted by construction of a tailor-made building for Gresham College in 1842 along what was to be soon thereafter renamed Gresham Street.

The first Gresham Street building (above) was replaced in the 1910s by the larger construction that now remains there, at the corner of Gresham and Basinghall streets.  The College relocated to High Holborn in 1991 and the building has been converted to commercial use.

Its vertical articulation follows the typical Renaissance sequence of base, upper stories and cornice/attic. The base features channel-jointed stone and a sort of raised ground storey above a basement-ground level that includes the main entrance on Basinghall Street.  The unusual arrangement is leavened by a regular succession of aedicualted windows with alternating triangular and segmental pediments. Above a moulded string course rise the upper storeys, sporting giant engaged Ionic columns (four on Gresham Street and three on Basinghall Street) in antis between channelled piers.

The piers add a sense of unity to the building, linking the lower and upper storeys as well as framing the latter.  The columns themselves are partly fluted. The intercolumnar modules are dedicated to strongly featured fenestration with prominent keystones and boldly protruding balconies supported by scrolled brackets. The entablature includes a pulvinated frieze.

The quality and monumentality of this corner building is typical of fully-fledged Edwardian Baroque Classicism and at the same time its relatively small size gives it a less imperious air than other examples in the City. Gresham College is by some reckoning the oldest existing higher education institution in London.  Though it never joined other institutions to form UCL, it did give rise to the Royal Society, in 1660, which is still in existence today.  Among famous people who held tenure at Gresham College, we can list composer John Bull, architect and scientist Christopher Wren, scientist Robert Hooke and statistician Karl Pearson.