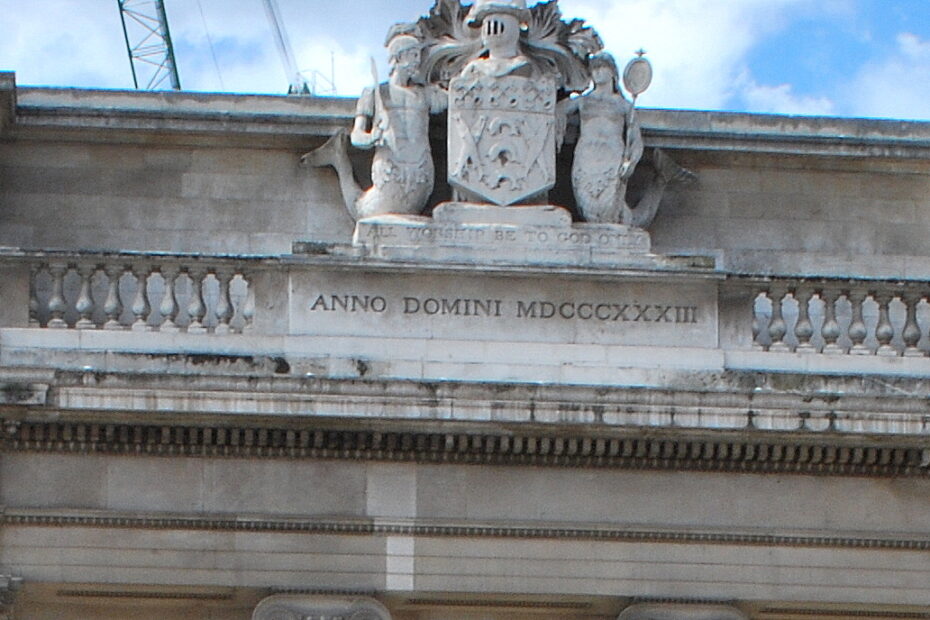 There have long existed guilds of fishmongers but the first full Royal charter was issued in 1272 by Edward I. From that point on, a number of successive liveries existed until the final unification in 1536, under Henry VIII. As early as 1434, the main location for the Fishmongers was the NW corner of London Bridge and the fate of their hall has therefore been inextricably connected to that of the bridge itself. Several successive buildings were located there but the current one is directly linked to the decision, in the late 1820s, the build a new London bridge  about 55 metres upstream from the former one and to create a new street (King William Street) to lead to it from Bank Junction.

The competition for the new Fishmongers’ Hall was held in 1831 and won by Henry Roberts, who was a pupil of Sir Robert Smirke and later teacher to George Gilbert Scott.  During WW2 the hall was badly damaged by aerial bombing and, due to strict post-war rationing, only completely rebuilt in 1954, based carefully on Roberts’ original fabric (most of which survived) and interior decorative scheme (a considerable portion had to be reproduced).  It is worth noting that the interiors have been modified several times between original construction and the bombing damage but have always hewn to the original taste.

The riverside aspect (seven bays) is of an exceedingly orderly and measured late Georgian Classicism.  An arcaded, rusticated base in Devon granite, includes a central, projecting portion incorporating a terrace.  Above that rise two main storeys and a blind attic.  The latter, in Portland stone, are dominated by a giant hexastyle Ionic order of engaged, fluted columns.  No further ornament is countenanced, with the exception of some moulding around the simplified entablature, and the triangular pediment has a blank tympanum.

The same restrained and subtly articulated theme defines the longer (11 bay) aspect along London Bridge Approach. Here, the lateral portions (each of 3 bays) are rigorously and simply framed.  The projecting central portion is itself tripartite, with antae enclosing a distyle Ionic order that mirrors the riverine columns. The main entrance is contained by one of the first floor aedicules, in the northernmost anta.  The attic storey is extended, over the central portion, and sports the only significant external sculptural work, two bas-relief panels in the wings and a full-relief coat of arms of the livery company in the centre.