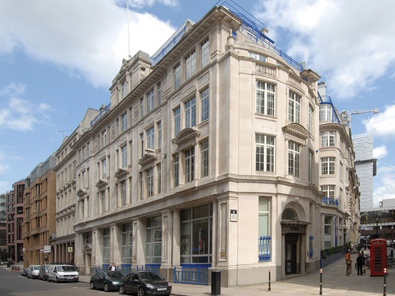 County House was built to hold the headquarters of the County of London Electric Supply Co. in 1928.  The plan and indeed the volumetric arrangement of this building are quite irregular. The western portion, with three bays on New Broad Street and some 15 bays (as well as a side entrance) along Blomfield Street, has a simple, rectangular plan, though it does have asymmetric set-backs above the main, fourth-floor cornice.  Next to that, we find a central section which is recessed against but parallel to the western wing.  The central section also features a separate combination of set-backs.  A further, eastern wing, is built at an angle to the other two sections, facing New Broad Street almost squarely.  The projecting return between central and eastern sections is nicely rounded, though this introduces further arbitrariness in the composition.  We would love to examine the original plans and the thinking behind this inordinately complex articulation.

Contrary to the almost wilfully idiosyncratic and asymmetric arrangement of the volumes, the surface treatment of the façade and return benefit from the orderly application of standard classical themes.  The ground floor features plain ashlar along the New Broad Street elevation(s) and a restrained, elegant Roman Doric order along Blomfield Street.  The subsequent storey is much more unified, with an alternation of simply framed and Ionic aediculated windows. An even simpler version of that restrained classical idiom is repeated in the further two storeys, which terminate in a modillioned cornice.  The broad style of window, in an even more stripped framing, is carried over the various upper storeys.

The County of London Electric Supply Company was founded in 1891. Over the next decades it expanded and gradually incorporated dozens of other power generating companies, with a particularly large combination of mergers in 1923.  After being headquartered for some time on Moorgate, it commissioned County House in 1928 and remained there until the company was nationalised under the Electricity Act of 1947.