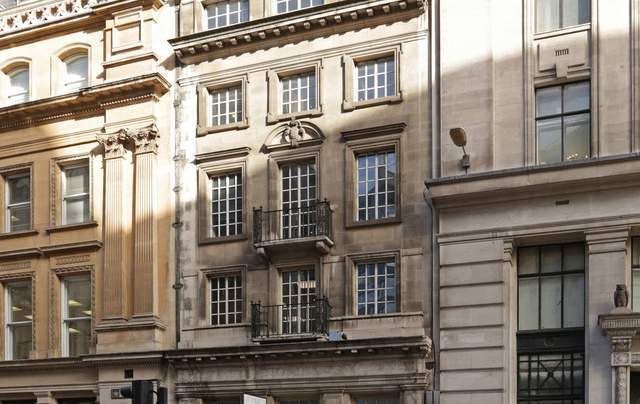 The building facades profiled on this site span from quite large and impressive down to minor ones, such as the former offices of the Bank of Victoria, shown below. Although the proportions are the tall and narrow ones of standard post-Great Fire brick boxes, the regularity of composition and solidity of the Portland stone cladding bestow an air of dignity on the façade.   After WW2, there was large-scale consolidation of the remaining single-lot plots into larger units. Before then, the City was full of late-Victorian and Edwardian re-builds of this sort.

The ground storey and mezzanine of teh Bank of Victoria are formulated as a simplified Tuscan order, providing a harmonious base for the central portion, rising over three storeys.   The latter is astylar but with sharply framed voids.   Note the formal pedimented treatment of the entrance door-case.  Two cartouches above the ground-floor windows feature sculptures of a Kangaroo and an Emu, in reference to the Australian occupant.  An attic storey and balustrade terminated the building above the cornice, before the usual late 20th C. addition of stepped-back mansard storeys to increase lettable space.

The Bank of Victoria was established in Melbourne in 1852, one of a spate of bank openings following the beginning of the Australian gold rush of the mid 1800s.  By 1887, it had 65 branches, all in the state of Victoria.  The bank merged with the Commercial Banking Company of Sydney in 1927 and in 1981 became part of the National Bank of Australia.