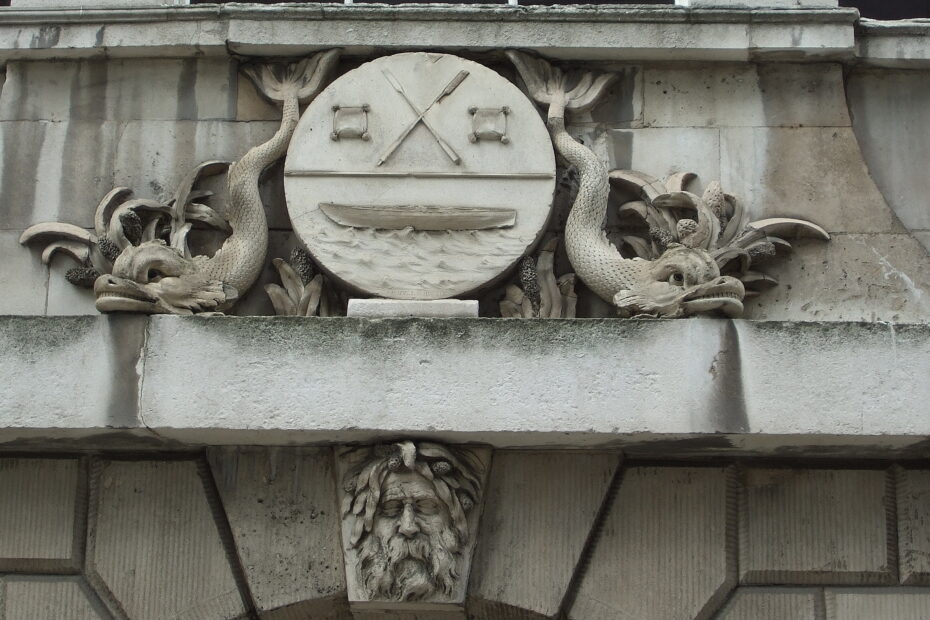 The Company of Watermen and Lightermen of the River Thames was founded in 1514 under an Act of Parliament.   It remains the only ancient City guild to be formed and controlled by Act of Parliament.  To an extent greater than some of the other livery companies, the Watermen’s is still heavily involved with its founding profession. The actual watermen (carrying passengers) and lightermen (carrying cargo) of the working Thames make up its membership. The young freemen of the company are eligible to participate in Doggett’s Coat and Badge Wager, which has been held annually since 1715. This gruelling boat race is held each July and goes along the river from London Bridge to Chelsea. The winner has the honour of wearing the scarlet coat, breeches and silver arm badge that are based on the original costume of an 18th C. waterman.

The building itself is the last remaining 18th C. livery hall and exudes all the elegance and restrained scale of the Georgian period. Plainer brick buildings next door, at No. 16 and 17, were incorporated into the hall complex for added space in the 1980s.  Note that No. 16 was once the livery hall for the now dissolved Fellowship of Porters.

The main facade of the Watermen’s Hall is founded on a rusticated ground storey surmounted by a pedimented, temple-like front with engaged Ionic pilasters. The entablature is in low relief and the frieze sports classical festoons. Framed by the columns, is a large window with a subsidiary aedicule that consists of somewhat Egyptian-looking columns as mullions as well as a large fanlight. The juxtaposition of formal, well-proportioned classical devices and ample fenestration against the moderate scale achieve the effect of elegance without excess so that the whole is clearly greater than the sum of its workmanlike details.

The arched ground floor window contains stained glass panes. Two carved panels with Triton-like creatures can be seen above the straight-arch doorways. The first-floor window apron displays the Company’s coat of arms, surrounded by stylised dolphins. The interior of the hall can be visited by appointment.  The small but welcoming entrance, the Court Room, Parlour and panelled Silver Room all deserve a visit.

We can only be grateful to the Company that such a gem has been preserved to date and that the later additions have been handled so sympathetically to the rest of the edifice and the small-scale setting of the lower portion of St Mary-at-Hill.