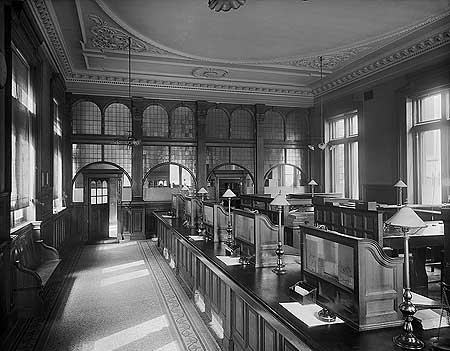 For much of the history of the City of London, the main source of short-term mercantile financing was through the discounting of bills of exchange. While accepting houses (largely merchant banks) took on the direct credit risk, discount houses (first private, then joint-stock specialized banks) provided the liquidity.  The Union Discount Company of London emerged from the marriage of two joint-stock discount houses, as an indirect consequence of the Overend-Gurney crisis of 1866s. Between 1885 and 1890, it became one of the two key joint-stock discount houses in the London bill market and went on to commission this building. The Banker’s Magazine, at its completion, enthused about the new structure, though it referred more to its facilities (electric light, etc.) than the accomplished facade.  Its first offices were at 38 Lombard Street but it moved here some 15 years later.

The Cornhill aspect is unified by superimposed orders of brown granite columns and pilasters‒ Roman Doric at the ground floor, then Corinthian, then followed by shorter pilasters. At the same time, there is a clear distinction between the tall, arcuated ground floor whose windows illuminated the banking hall and the more regular metrics of the first floor, with alternating triangular and segmental window pediments. The bays at each end of the façade feature open-base pediments supported by wide consoles.

The main cornice and the Attic storey one contrast to good effect. The Union Discount Co.  was refurbished in the late 1970s by the Fitzroy Robinson Partnership, linking it structurally and aesthetically (through the wall colour) with a less prominent but not entirely mismatched Neo-Jacobean corner building next door, at n. 42. The interiors are well-preserved.

This building makes also an interesting comparison with the National Discount Co. at No. 33-35 Cornhill, since a superficial aesthetic perusal would suggest that the Union Discount building former predates the National Discount one, whereas the opposite is true. This lack of stylistic linearity is typical of the less-than-doctrinaire manner in which most City (and British) classical buildings were designed, notwithstanding the occasional criticism of the style ideologues then and now.

As a further point of interest, the poet Thomas Grey was born in 1716 in a house on this site.