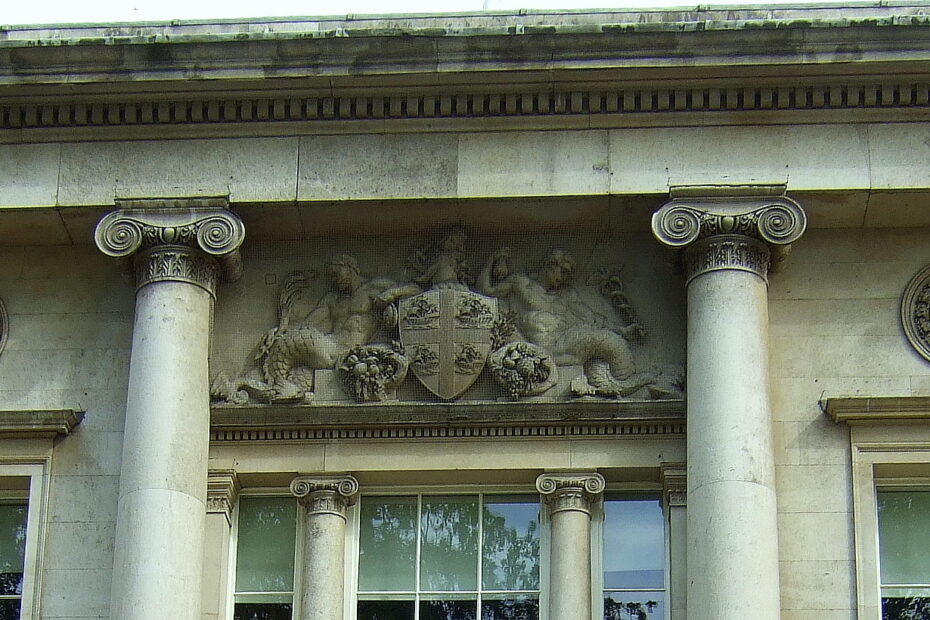 Samuel was James Wyatt’s less ‘artistic’ but technically very proficient brother and this particular edifice, both in plan and elevation, is a masterly essay in maintaining a sense of composure and elegance even as the style of the day transitioned from the domesticity of the Georgian interpretation of Palladianism, to the more reserved austerity of neoclassicism.  Certainly, none of the ‘archaeological’ pretensions of the latter are allowed to intrude here so that details include allegorical panels, medallions of King George III and Queen Charlotte and the corporate coat of arms.  The unpretentious scale and careful articulation of Trinity House do not call for more profuse ornament.

The principal, original building consists of a rusticated ground floor and a piano nobile with an attic storey (at the sides). The horizontal arrangement is tripartite, the central section being wider and recessed relative to the lateral bays.  The main Ionic order is expressed as coupled pilasters in the wings and two more widely spaced columns in the central section. The fenestration, on a 1-3-1 plan, is sharply differentiated between the simple segmental opening at the ground level vs. the aediculated second-storey ones, graced by a subsidiary Ionic order.

When the ebullient Port of London Authority headquarters were built, next door, in the 1920s, it became a staple of architectural criticism to compare Trinity House’s reserved elegance with the prideful, post-Edwardian grandeur of the PLA pile.

The original building was badly damaged, especially in its interiors, in 1940.  The destruction was remedied in in 1952-53, supervised by A. E. Richardson.  In addition to the wholesale rescue of the original fabric, the post-war reconstruction included an extension, in tan brick with stone facing, which provided additional space including a large library.  The 1950s addition extends the ground floor rustication, window details and main entablature seamlessly and respectfully. In resisting the temptation of brash autership and “referencing” but rather paying homage to an excellent 18th C. precedent, Richardson here gave a valuable lesson to other architects who tread on similar ground. All this, of course, predates the strictly anti-contextual Venice Charter

The Corporation of Trinity House was founded in 1514, with authority to regulate pilotage on the River Thames. Its full title is a mouthful: “The Master Wardens and Assistants of the Guild Fraternity or Brotherhood of the Most Glorious and Undivided Trinity and of Saint Clement in the Parish of Deptford Strond in the County of Kent”.  Later on, Queen Elizabeth I extended the corporation’s remand to the whole of England and Wales. Samuel Pepys, William Pitt and the Duke of Wellington have been among its notable Masters. Today, it maintains the lighthouses and navigation aids for the whole of England and Wales. It also retains its role as a charity for seafarers, their dependants and London in general.  The first permanent lighthouse was erected in 1609 and the last manned one became automated in 1989.  In its history spanning over 500 years, the Corporation of Trinity House has contributed to navigational safety at home and, during wartime, abroad as well.