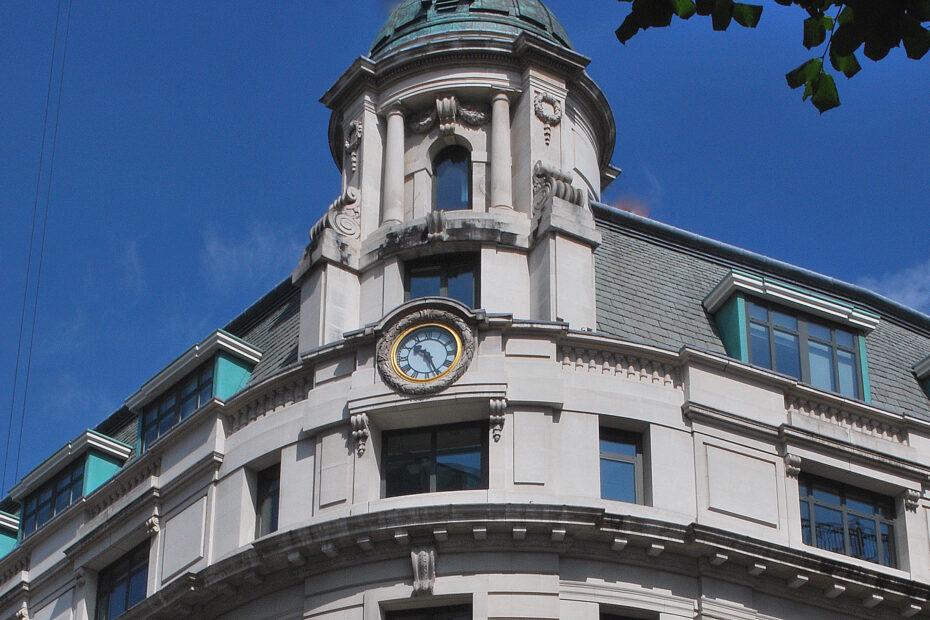 The history of the building at 99 Gresham Street is rather unique insofar as it was erected in the 1990s but it is, along the entire Gresham Street aspect and roughly half of its Coleman Street elevation, a virtual reproduction of the preceding building.

Swiss Bank Corporation first moved its London headquarters here in 1925 and remained at this location well into the 1980s, until close to the time of its merger with UBS.  The freehold at 99 Gresham Street was purchased by property developers Greycoat Plc., who were faced with something of a conundrum. The eastern portion of Gresham Street was spared the wholesale wartime destruction that visited its middle and western sides. As such, it retains a unity of scale and appearance that is protected as part of the Guildhall Conservation Area.  At the same time, Greycoat felt that the height between storeys in the fine 1925 Meakin, Archer & Co. building was too low for modern bank offices.

The solution was a wholesale rebuild (as opposed to the usual internal gutting and facadism), but one that maintained the key architectural elements of the preceding building (project lead by Martyn Gates). This applies not only to the overall massing but also to such details as the baroque tower surmounting the corner entrance, stone cartouches and other decorative elements.  Some of these used the original stone in from the 1925 building, though most of the Portland stone facing was newly installed by Albion Stone.

The ground storey in the original 1920s building was faced in contrasting stone, while the current structure is entirely faced with Portland stone, but at the same time it is rather ‘open’ and lacking the sense of lithic masonry which was retained for the upper storeys.  The interstices between widely spaced piers and Tuscan columns betray some insubstantiality relative to the higher storeys.

Above this level, elements such as the shallow pilasters, channelled facing at the corner, protruding sills with console brackets, panel moulding, dentilled cornice and balustrade attic storey are altogether very balanced. The detailing is neither stinted nor overwrought and the richly articulated tower, with its copper dome, provides both a focal point and a strong unifying element of the S and E aspects as well as tying the mansard roof into the whole.