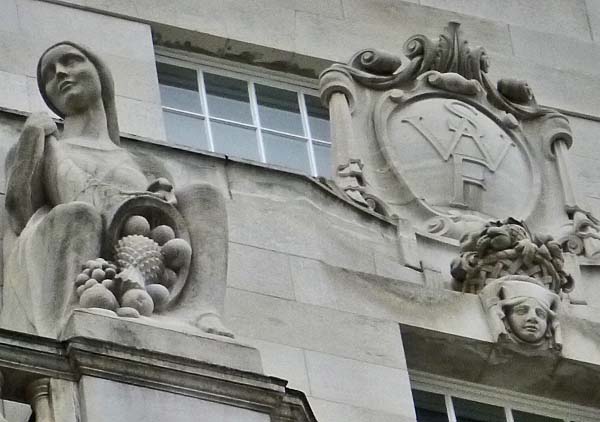 Progressing eastward along Cornhill, after the imposing colonnade of Lloyds Bank and the transitional Classic-Deco Commercial Union Assurance, we come to The London offices of Scottish Widows, built in the inter-war period like the two aforementioned headquarters. Here, Curtis Green expresses a stripped classicism that is typical of 1930s finance buildings still largely eschewing Modernist or even Deco devices.  The base, like the Commercial Union next door, is channelled and consists of five bays with a central entrance, although slightly less bold in the decorative elements. The central portion, composed of further five storeys, however, is more attuned to the overall composition than its neighbour. It features a simplified entablature at the bottom, pedimented central window on the second storey and plain ashlar finish of the facade.

The main portion culminates in a balustrade beyond which a recessed combination of stepped bays maintains external unity while introducing a set of terminating devices. These include two sculptures in the round by William McMillan, two escutcheons on the subsidiary antae and a pedimented central gable with a frieze. The visual references are to Scottish Widows’ original mission, to ensure the financials security of widows and orphans.

Scottish Widows was founded in 1815 to establish “a general fund for securing provisions to widows, sisters and other females”, at a time where the death of the male head of household would typically spell economic disaster for the survivors.  It is now part of the Lloyds group.  According to company records, Cornhill was Scottish Widows’ London home since 1867. The 1935 building seen here was vacated by the company in the 1990s.