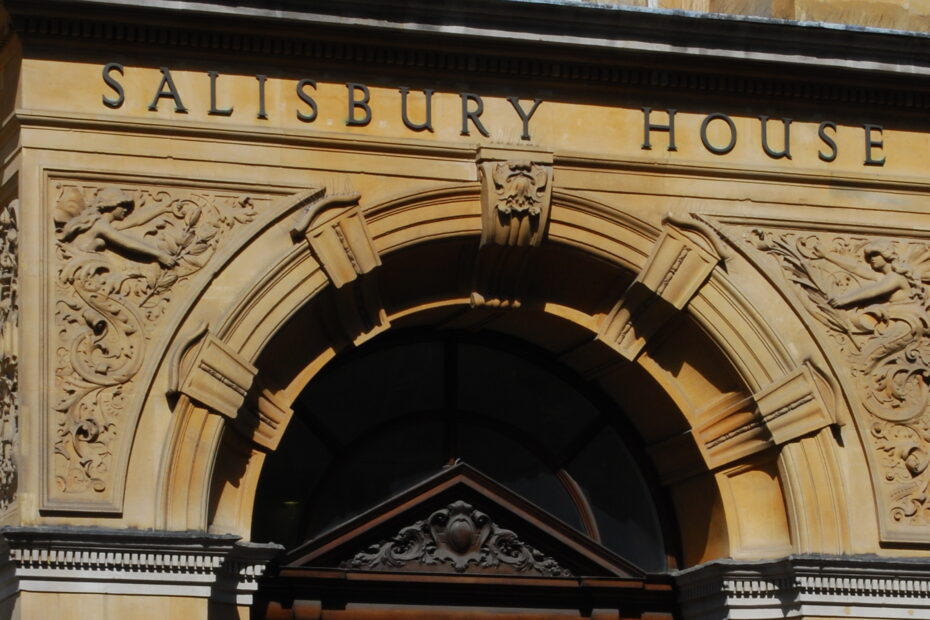 Salisbury House was built as a speculative office development to a design by the prolific firm of Davis & Emanuel.  This very large Y-shaped edifice was planned for 800 separate office rooms, necessitating five separate light wells.  Its facades occupy a full (SW) quarter of Finsbury Circus, Circus place (W) and, from there, most of London Wall up to Moorgate.

The attractive colour of the Bath stone cladding makes it stand out from the more typical Portland stone prevalent in buildings of that period, in this area. Yet, like London Wall Buildings and Broad Street Place, the sheer size of it presents compositional challenges beyond the simple programmatic utilitas.  Specifically, while the concave Finsbury Circus aspect naturally produces some relief of mass, the long, straight London Wall aspect runs the risk of repetition and dullness.

This is partly alleviated by the reduction in elevation by two storeys, on the south side as well by complex composition and applied ornament along the entire perimeter. Note the superimposition of Doric and Ionic orders.

Throughout, we note French- and English-baroque-inspired devices including prominent banding, copper mansard roof details, pilasters, mullions and gabling.  Furthermore, each of the six entrances is  highlighted by sculptural additions and added elements in elevation.  For instance, on the Finsbury Circus side, the central entrance features a complex treatment including banded paired columns and archivolt as well as allegorical sculptures in the spandrels and frieze.  The central bay also features a higher gable and roof mansard, with a repetition of the banded archivolt theme just below the gable.  The two subsidiary Finsbury Circus entrances are marked by raised staircases and a projecting entablature supported by corbels and flanked by scrolled segments of an implied pediment.

There is some debate about the subject of the aforementioned carvings, with the left-hand female figure said to represent either ‘victory’ or ‘telegraphy’ and the right-hand one said to represent either ‘plenty’ or ‘writing’.  The devices suggest a broader reference which I would interpret as ‘progress through commerce’ (a winged wheel signifying better transport or progress, a telegraph pole, a writing scroll signifying knowledge or law and a cornucopia).