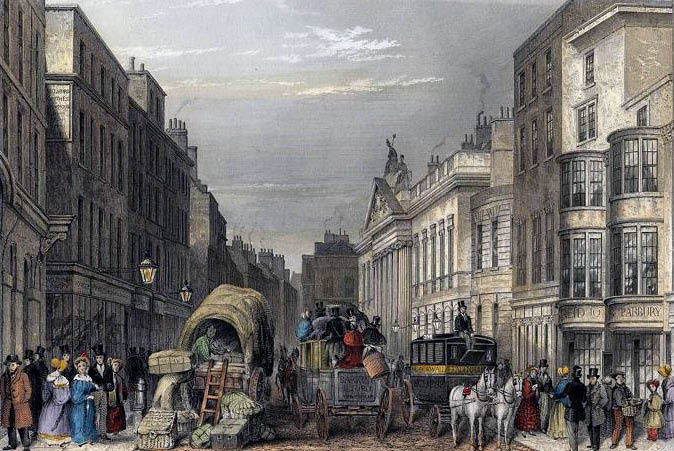 Both the street and market in this part of the City are named after a prominent building, the Leaden Hall, which is first recorded in 1292.  It was originally owned by the Neville family and included both a large building (with a leaden roof; hence the name) and adjoining market area.  From the 14th century onward, it transitioned into the public realm (for more details see: Leadenhall Market entry).  Many Roman remains were found here, including under the present market.

The current Leadenhall Street runs from Lime Ward into Aldgate Ward. Its western extremity (from Gracechurch Street, up to Lime Street) was once considered part of Cornhill and the remaining portion known as Aldgate Street or High Street. It was first mentioned under the current Leadenhall Street name only as late as 1622.  Together with the other three major streets that meet here (Gracechurch, Bishospgate and Cornhill), it forms the so-called ‘Carfax’ crossing.

The broad location of the original Market has been stable since the late middle ages but Leadenhall Street itself has undergone an even greater degree of constant renewal than other City streets. From the 1720s to the 1860s, the large East India Company’s headquarters dominated the street- much as its warehouses dominated Fenchurch Street to the south. East India House extended for a frontage of 200 feet (about 65 m.) from the eastern edge of the market up to Lime Street, representative of the great wealth and influence exercised by the East India Company in the 18th century.

The pre-eminence of the East India Company is usually given as the reason why shipping and insurance businesses and institutions have clustered around Leadenhall street and Fenchurch street since the 18th century.  Eventually, its power and influence waned as successive governments took over the running of the Indian colonies. By the mid-1800s it was a shell of its former self and in 1861 East India house was torn down and replaced by speculative office buildings and large wine warehouses, among other things.

Roughly 75 years later, the East India Company’s dominant presence was replaced, along Leadenhall Street, by Lloyd’s of London.  Thus, a royally backed, force-based enterprise was replaced by a more democratic and contractually based one. This neatly parallels the evolution of the Victorian age.  Lloyd’s of London famously began in a coffee house in the 17th century and by 1774 had moved to the Royal Exchange, whence it remained until the 20th century, despite the burning down and rebuilding of the Royal Exchange in the 1800s.  In 1928 Sir Edwin Cooper’s new, large set of buildings for Lloyd’s was built here but was modified as early as the 1950s, with only a portion of it surviving to this day.  The well-known ‘high-tech-style’ structure by Rogers replaced most of the 1920s-1950s complex in the 1980s.

At least a couple of decades before the iconic new Lloyd’s building, Leadenhall saw some of the earlier forays (for the City of London) into mid-century modernism (‘international style’), with the Commercial Union plaza and new P&O building being erected here.

In turn, many post-war structures, including those surrounding said plaza, have been replaced in the early 21st century as Leadenhall has become the centre of the largest cluster of high rises in the City.

Despite all the architectural changes, Leadenhall remains a global centre for the insurance and shipping industries and (mostly at its western and eastern extremities) retains several fine classical buildings.

Classical buildings of interest (from the west going east):

3 thoughts on “Leadenhall Street and Market”