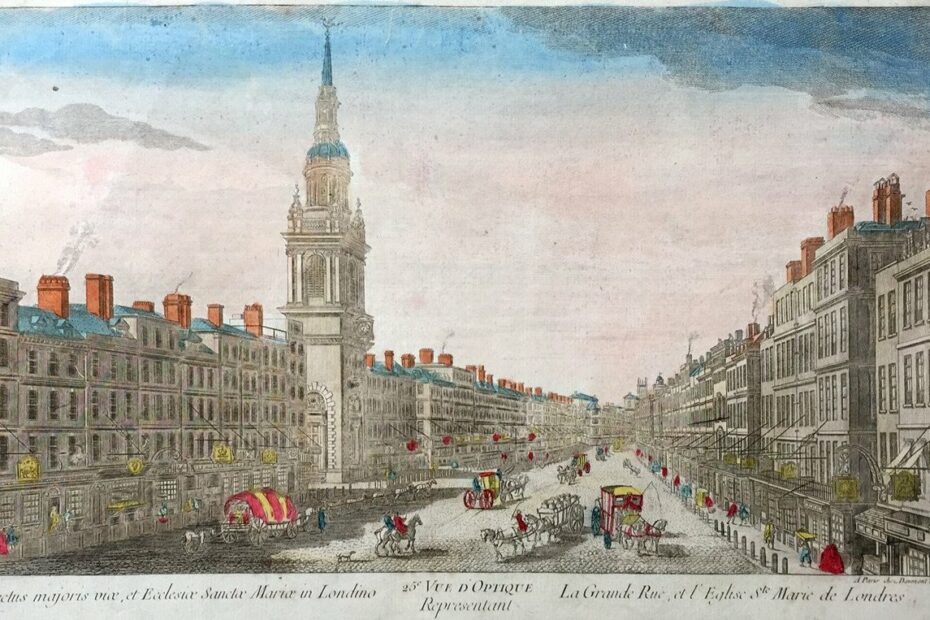 The uninterrupted street that bears the name Poultry at its eastern end and Cheapside at the western one marks the border between Cheap and Cordwainer wards, which in the Middle Ages were the wealthiest commercial districts of the City. Together with the spur of Poultry known as Mansion House Street, they link the focal point of Bank Intersection with the N-S route that runs down from Aldersgate to the rear of St. Paul’s Cathedral.

Almost certainly one of the major early Roman roads, medieval Cheapside or Westcheap (western market) was, prior to the great fire, likely the City’s widest street (the market was held down its middle) with fine houses, a market cross and the largest water conduit in the City. Parades and tournaments were occasionally held there. Several neighbouring streets are named for the commodities that were once sold there (wood, milk, bread, honey and, of course, poultry).

Following reconstruction after the fire, it remained an important commercial thoroughfare. Barings and Barclays got their start there in the early 19th century (the latter as linen merchants). From the 1790s onward, the area became closely associated with the textile trade that stemmed from the industrial revolution and remained so for close to a century. It also endured as a major shopping street, competing with Oxford Street, into the early 20th century. Unlike elsewhere, most of the change here was wrought by WW II destruction, rather than post-war vandalism.

The name Poultry, first recorded in 1301, derives from the concentration of  poulterers that marketed here from the early Middle Ages. The street used to extend further E than the Mansion House. As late as 1994, the entire southern aspect (of Poultry) consisted of Victorian and Georgian buildings, which were demolished after protracted discussion, to build the post-modern development at n.1.

Nowhere in the City than here is more evident the transformation from a living community , albeit dominated by business, to a virtual office monoculture.  From the turn of the century onward, the tendency for taller, more imposing buildings and choice of cladding turned Cheapside and Poultry in something of a Portland Stone ‘canyon’,with the exception of St Mary-le-Bow and a few modernist glass boxes.