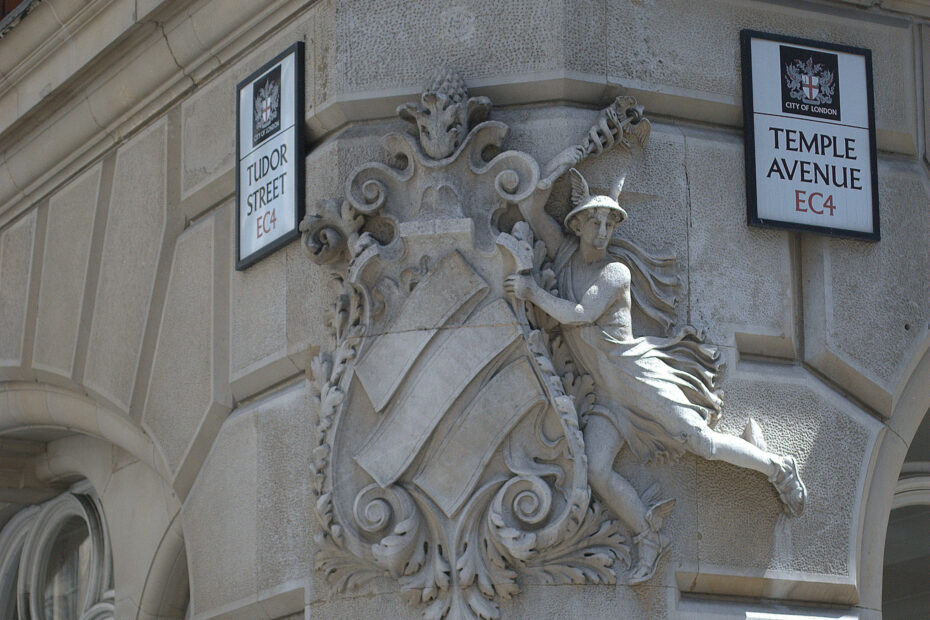 In stylistic terms, this building borders on eclectic historicism and it is a good example of a recurring issue we face in compiling this material: should it be included under ‘Classical Architecture’ or not?  The ground floor is unmistakably in the vernacular Classical tradition but the upper stories veer between Romanesque and Tudor details, only to be topped by a Classical balustrade along the roof line.  The tersely opinionated ‘Buildings of England’ tags it as “tough minded” but, to our thinking. it exudes a calm poise and overall sense of proportions that even at the time of its construction could not be taken for granted.  The facing is Portland stone for the ground floor and the rest is in red brick with ‘Ruabon’ terracotta detailing.

Tudor Street (formerly Temple Street) over the years housed many printing presses, including that for the Daily telegraph (later moved to Fleet Street), the Co-operative Printing Society, Marshall Printers, John Dicks Press, the Daily Mail and, of course, Argus Printing.  Closely identified with the publishers Argus Press, Argus Printing also put to press many other magazines and newspapers, including the Observer, for many years.  It left the premises in 1958.  Records show that many other publications also sub-let space in this building during Argus’ tenure and after (United Newspapers, the Geographical Magazine, etc.).  In the 1990s, with nearly all printers having decamped from the vicinity of Fleet Street, the Argus Printing building was re-named Victoria House and let by the Corporation of the City of London to the Salvation Army for use as a homeless shelter.  It is a mark of how much central London and the City’s environs have changed since then that it now houses high-end apartments, having bee redeveloped by St George Developers in the early 21st century.